In Memory of
Ret. Cpt William "Bill"
Gibney, USMC
2018
Click above to light a memorial candle. 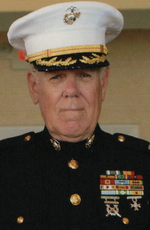 It is with great sadness that we announce the unexpected passing of Ret. Cpt. William (Bill) Alfred Gibney, USMC on July 12, 2018. William joined the USMC at age 17 and retired after 20 years of service in 1970. He served in Korea and Vietnam; while in Vietnam he received two Navy commendations. He then worked in management with Sears Roebuck in Pittsfield and then transferred to Myrtle Beach, SC, where he later retired from that position after approximately 18 years. After that, he worked part time in security for the local hospital in Myrtle Beach where they were residents for 37 years before returning to Pittsfield in 2016.

Beloved husband to Arlene Gibney (Slater) of 63 years. Married at First Baptist Church of Pittsfield on October 9, 1954. He leaves his daughter, Eileen Donovan and her husband, Brian and her son, Paul Wales who reside in Pittsfield. He also leaves his son, Charles Gibney and his wife, Robin and their children, Abbagail, Maggie and Charles Joseph Gibney who reside in Rock Hill, SC. He was pre-deceased by his sisters, Norma Tomaka and Florence Drake and his brother, Robert (Jack) Gibney.

He and his wife were world travelers and were true “cruise ship enthusiasts”. He loved sharing his stories of the Corps for many years with everyone he knew and with the many vets he encountered in his travels. He had a deep love for his family and friends.

FUNERAL NOTICE: Funeral services for Ret. Cpt. William A. Gibney, USMC, will be Tuesday, July 17, 2018 at 1:00pm at the Dery Funeral Home with Elder Eric LaRoche, officiating. Burial will follow with full military honors at Pittsfield Cemetery. Visitation hour will precede the service beginning at 12noon. In lieu of flowers, donations may be made to Wounded Warriors or The American Cancer Society, in care of DERY FUNERAL HOME, 54 Bradford Street, Pittsfield, MA 01201.


To send flowers to the family or plant a tree in memory of Ret. Cpt William "Bill" Gibney, USMC, please visit our Heartfelt Sympathies Store.