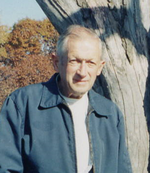 Born in Harland, Vermont, on August 11, 1931, the son of N. Arthur and Ruth Flanders Potwin, he was a graduate of Vermont schools.

A Korean War veteran, he served with the United States Marine Corps from 1951 to 1955, a year of which was overseas, and was honorably discharged with the rank of Sergeant.

Mr. Potwin was employed by O’Connell Oil Associates where he was a truck driver for 20 years.

He was a dedicated communicant of St. Agnes Parish in Dalton.

Mr. Potwin is survived by a brother, Ronald Potwin & wife Linda of Fort Plain, N.Y.; a sister, June Smith Weston, & husband Joseph of Saxtons River, VT., and a half-brother, George Potwin. He is also survived by nieces and nephews, of VT

FUNERAL NOTICE: Funeral services for Vernon R. Potwin will be held Tuesday, August 28th with a Liturgy of Christian Burial at 12:00 Noon at St. Agnes Church celebrated by Rev. Christopher A. Malatesta, Pastor. Burial with military honors will follow in St. Joseph’s Cemetery in Pittsfield. Calling hours will precede the service, from 10:30 to 11:30 at the DERY-FOLEY FUNERAL HOME in DALTON. In lieu of flowers, memorial contributions may be made to the Knights of Columbus Council #411, 108 Pinecrest Drive, Dalton MA 01226

To send flowers to the family or plant a tree in memory of Vernon R Potwin, please visit our Heartfelt Sympathies Store.