To share your memory on the wall of Robert Barber, sign in using one of the following options:

Provide comfort for the family of Robert Barber with a meaningful gesture of sympathy.

Print
Robert C. Barber, 47, of Pittsfield, died Tuesday, December 11, 2018, surrounded by friends and family, after one tough fight against cancer.

He was born in Springfield, MA on March 8, 1971, to the late Francis and Laura (Dagesse) Barbe... Read More
Robert C. Barber, 47, of Pittsfield, died Tuesday, December 11, 2018, surrounded by friends and family, after one tough fight against cancer.

He was born in Springfield, MA on March 8, 1971, to the late Francis and Laura (Dagesse) Barber.

Self-employed as a general contractor, he could fix anything and everything. He never refused to lend a hand to anyone, day or night.

He had a love for Nascar, four-wheeling, and snowmobiling. He was an avid ice fisherman, and
as soon as Winter hit Pontoosuc Lake was his home.

He leaves his life partner, Tracy Kipp; daughters, Hailee Barber and Ava Barber; brothers, Tommy Barber and Nelson Orsini and his wife Lisa; Paul Merriam and all the garage brothers;
and his beloved dog, Annabelle.

He was pre-deceased by his sister-in-law, Bernadette Barber.

Funeral Notice: A celebration of the life of Robert C. Barber will be held at a later date. DERY FUNERAL HOME is in charge of arrangements.
Read Less

To send flowers to the family or plant a tree in memory of Robert Barber, please visit our Heartfelt Sympathies Store.

There are no events scheduled. You can still show your support by sending flowers directly to the family, or planting a memorial tree in memory of Robert Barber.
Visit the Heartfelt Sympathies Store 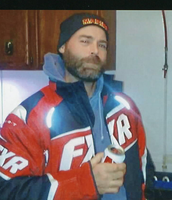