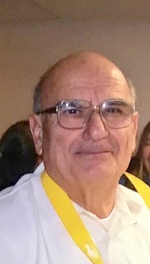 Pittsfield – Peter Skafidas, 87, of 3 Kathy Way, died Thursday, February 1, 2018, at Berkshire Medical Center, following a short illness.
He was born in Longastra, Greece, on June 14, 1930, and was the son of the late Angeliki Nikolopoulos and Stavros Skafidas. Peter was educated in Greece and completed his service in the Greek army before following his future bride to the United States.
Peter married the love of his life, and former Eva Roussis, on November 8, 1958, in Albany, NY, where they remained until moving to Pittsfield in 1966. Peter owned and operated Peter’s Diner from 1966 to 1977, and the Pizza House in Adams, MA, from 1977 until his “retirement” in 1992. However, always the hard worker with a strong work ethic, he was unable to sit for long and worked as a cook at Hillcrest Educational Centers from 1993 until 2004.
Anyone that knew Peter also knew that his greatest joy was his grandchildren. They, in turn, loved and cherished their Papou, and knew how blessed they were to have him in their home for the past 17 years. Peter also loved gardening and sharing his vegetables and flowers with family and friends. He enjoyed many years tending to his numerous gardens at Mass Audubon’s Canoe Meadows Wildlife Sanctuary on Williams Street.
Peter leaves behind his devoted daughter, Anastasia Desjardins, with whom he resided, her husband, David, his four beloved grandchildren, Alexis King, Danielle, David, and Ava Desjardins, and a number of nieces and nephews. He was predeceased by his loving wife, Eva, who passed away on September 12, 2000, as well as his brother, Spiro Skafidas, and sister, Pota Petroulias. Peter was a long time member of St. George Greek Orthodox Church and a past member of AHEPA.


To send flowers to the family or plant a tree in memory of Peter Skafidas, please visit our Heartfelt Sympathies Store.