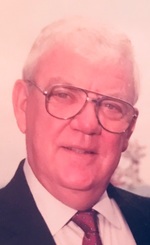 John Benjamin Pinna, 82, of BerkshireTown Apartments, died Tuesday, November 21, 2017, at his home.
Born in Pittsfield on July 17, 1935, the son of John S. and Lillian Mulqueen Pinna, he
was a 1953 graduate of Pittsfield High School.
A Korean War veteran, Mr. Pinna enlisted with the United States Air Force on July 16, 1952. He served a two-year tour of duty in France. He re-enlisted and served as an Air Policeman. He was honorably discharged on November 24, 1965.
Mr. Pinna was employed by General Electric Company where he was a welder in the
Naval Ordnance Systems Division for 29 years.
He was a communicant of St. Charles Church and a member of the G.E. Quarter Century
Club and the Lenox Sportsmen’s Club.
He enjoyed fly tying and fly fishing, carving water foul, and leatherwork. He was an
expert marksman who also enjoyed archery.
Mr. Pinna leaves his wife, the former Lois E. Guyette, whom he married June 10, 1975.
He is also survived by his children, Maureen (husband John) White of Pittsfield, Michael
(wife Kathy) Pinna of Dalton, James Pinna of Winter Park, Fla., Renee (husband, Mark) Broadbent of Longmeadow, Mass., William Lizotte of North Adams, and Karen Tatro of Hinsdale; a sister, Mary Gloria, of Pittsfield; elven beloved grandchildren, Caitlin, Emily Anne,
Samantha, Nicole, Mollie, Cody, Laramie, Kirsten, Maegan, Jordan, and Colin; and three beloved great grandchildren, Jaiden, Brianna, and Paetyn; his sisters-in-law, Elizabeth (husband Kenneth) Luscier, and Marilyn (husband Lou) Choquette; as well as nieces and nephews, and a special goddaughter, Jen.
He was pre-deceased by a sister, Frances Scherben.

FUNERAL NOTICE:
Funeral services for John B. Pinna will be held Saturday, November 25, with a
Liturgy of Christian Burial at 10:00 a.m., at St. Charles Church celebrated by Rev. Michael J. Wood, Administrator. Burial will be at a later date in St. Joseph’s Cemetery. There are no calling hours. In lieu of flowers, memorial contributions may be made to HospiceCare in The
Berkshires or to St. Charles Church both in care of DERY FUNERAL HOME, 54 Bradford Street, Pittsfield.

To send flowers to the family or plant a tree in memory of John Benjamin Pinna, please visit our Heartfelt Sympathies Store.