Obituary for Fuad A Nassif 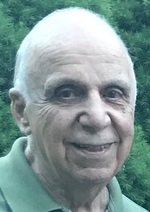 Born in North Adams on January 21, 1931, the son of George and Sheriban Nahme Nassif, he was a graduate of North Adams State College where he earned a bachelor’s degree in Mathematics.
In 1955, Mr. Nassif went to work for General Electric Company where he was Manager of Subcontract Sourcing in the Ordnance Department. He was a member of the MK 45 Program Team; and in 1964, received a G.E. Management Award from Manager Manufacturing for outstanding effort toward winning the MK 84 contract. He retired in 1989 with more than 33 years of service. He was a member of the G.E. Elfun Society since 1974. He also enjoyed playing bridge with his G.E. co-workers for over 40 years.

A founder and life member of Basketball Hall of Fame since 1974, he was a member of the IAABO Basketball Officials since 1954, and an active official for 41 years at the high school and college level. He was also a long-standing member of Friends of the Dalton Free Library, and a member of the National Rifle Association.
Mr. Nassif leaves his wife of 66 years, the former, Constance R. Harrington, whom he married on June 28, 1952.

He is also survived by three daughters, Gail A. Nassif (and her longtime companion Nick Warner) of Albany, N.Y., Sharyn (and her husband Ross) Thoms of Nashua, N.H., and Lynn Lynch of West Boylston, Mass.; a son, James (and his wife Johnna) Nassif of Wells, Maine; ten grandchildren; one great granddaughter; and a a sister, Donna Rogers of Silver Springs, Md.

FUNERAL NOTICE: Funeral services for Fuad Ameen Nassif will be held Friday, September 7, 2018, with a Liturgy of Christian Burial at 11:00 a.m., at St. Agnes Church celebrated by Rev. Christopher A. Malatesta, Pastor. Burial will follow in Ashuelot Cemetery. Calling hours will be Thursday, from 4:00 to 7:00 p.m., at DERY-FOLEY FUNERAL HOME, in Dalton. In Lieu of flowers, memorial contributions may be made to Seven Hills Foundation in honor of Michael Lynch (Fuad’s grandson) and all other people with special abilities in care of the Funeral Home, 890 East Main Street, Dalton.

To send flowers to the family or plant a tree in memory of Fuad A Nassif, please visit our Heartfelt Sympathies Store.