To share your memory on the wall of Bruno Lovato, sign in using one of the following options:

Provide comfort for the family of Bruno Lovato with a meaningful gesture of sympathy.

He was born in Chicago, IL on July 5, 1928, the son of the late Gustavo and Lucia Danese Lovato.

He was born in Chicago, IL on July 5, 1928, the son of the late Gustavo and Lucia Danese Lovato.

He attended local schools in Lee, and went on to join the US Army, having served in the Korean War.

He married the former Sandra Bonacquisti on June 27, 1959. Mr. Lovato started his career in 1954 and retired in 1991. He worked as a laborer for Tierney Construction as a Mason’s Tender. He was a member of the Local Laborers Union 473.

Bruno was a communicant of the former Mt. Carmel Church, a member of UNICO of Pittsfield, where he was once Man of the Year; a member of the American Legion, the Italian American Club, the ITAM, and the GEAA, where he loved to golf. He also was a member of the Father William Cantino Post. He was an avid sports fan. He loved his Yankee’s, New York Giants, Boston Bruins and Boston Celtics.

He loved spending time at the Italian American Club, playing Pitch and Bocci.
He leaves behind his wife, which in June would have been 60 years, Sandra Lovato of Pittsfield; daughter, Donna Whalen and husband Durt of Berkshire, MA; son Kevin Lovato of Pittsfield; sister Bruna Borowski of Florida; and four grandchildren, Kyle and wife Liz Whalen, Devon and wife Sydney Whalen, Kaleigh and Sadie Lovato.

He was predeceased by his brother, Alex Lovato, sisters, Mary Pezzottini, and Amelia Cetti. He also leaves behind several nieces and nephews.


FUNERAL NOTICE: Calling hours for Mr. Lovato will be held, FRIDAY, March 15, 2019 from 11:00am to 1:00pm at DERY FUNERAL HOME. Members of UNICO will gather at 11am for their ritual. In lieu of flowers, memorial contributions may be made in his name to UNICO of Pittsfield, in care of the funeral home, 54 Bradford St, Pittsfield, MA 01201.
Read Less

To send flowers to the family or plant a tree in memory of Bruno J Lovato, please visit our Heartfelt Sympathies Store.

Receive notifications about information and event scheduling for Bruno

We encourage you to share your most beloved memories of Bruno here, so that the family and other loved ones can always see it. You can upload cherished photographs, or share your favorite stories, and can even comment on those shared by others. 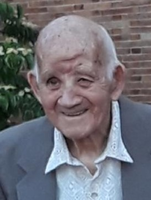