To share your memory on the wall of Arthur Cestaro, Jr, sign in using one of the following options:

Provide comfort for the family by sending flowers or planting a tree in memory of Arthur Cestaro, Jr

Provide comfort for the family by sending flowers or planting a tree in memory of Arthur Cestaro, Jr

He was born in Somerville on April 9, 1933, the eldest child of the late Arthur Theodore Cestaro, Sr. and Delphine Johnson Cestaro. He attended Malden Catholic High School in Malden and shortly after graduation enlisted in the U.S. Air Force. After serving five years in uniform he attended Tufts University, where he earned a Bachelor of Science degree in Electrical Engineering in 1961.

He headed his own electrical equipment design and manufacturing company, Rust Corporation of Everett, then became a design and quality control engineer for General Electric for 35 years.

He married his high school sweetheart, Ann Marie Moriarty of Malden, in April of 1952. They were married for 66 years until her passing in 2018.

He was a devout Roman Catholic, and was most recently a communicant of St. Mary of the Assumption Church in Cheshire, and was very active in the church. He was a great sports fan of all Massachusetts pro sports teams, going back to his first favorite team, the Boston Braves. His hobbies included cooking (a master of Italian cuisine,) classic movies (especially Westerns), and coaching sports.

FUNERAL NOTICE: Due to the coronavirus pandemic, the funeral is closed to all but immediate family. The family hopes to have a memorial Mass and celebration of life after the crisis has passed. In lieu of flowers, memorial contributions may be made in his name to St. Jude Children’s Hospital at stjude.org. DERY FUNERAL HOME, 54 Bradford Street, Pittsfield, is handling the arrangements.
Read Less

To send flowers to the family or plant a tree in memory of Arthur T. Cestaro, Jr, please visit our Heartfelt Sympathies Store.

Receive notifications about information and event scheduling for Arthur

There are no events scheduled. You can still show your support by sending flowers directly to the family, or planting a memorial tree in memory of Arthur T. Cestaro, Jr.
Visit the Heartfelt Sympathies Store

We encourage you to share your most beloved memories of Arthur here, so that the family and other loved ones can always see it. You can upload cherished photographs, or share your favorite stories, and can even comment on those shared by others.

Posted Jun 03, 2020 at 04:20pm
Sorry to here of the loss of our Arthur, we worked together at GE Labs in Cambridge in the early 60 's.
Mary lead his soul to see the Face of God.
His cousin on the Johnson/Leonard side, Deacon Paul Cabral, Medford
Comment Share
Share via: 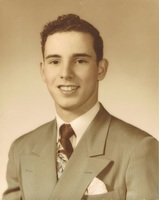