In Memory of
Anna  C.
Vincent (Hodgetts)
1918 - 2017
Click above to light a memorial candle.
Memorial Candle Tribute From
Dery Funeral Home
"We are honored to provide this Book of Memories to the family."
View full message >>>
Send Flowers
Menu 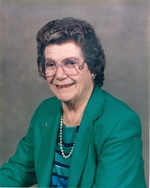 Anna C. Vincent, 99, of 3 Onota Lane passed away on Sunday at Berkshire Medical Center. Born on May 7, 1918 in Ridgewood, NJ, she was the daughter of the late William and Ethel Cranston Hodgetts. A longtime Pittsfield resident, she was educated in New Jersey schools and was a 1936 graduate of Ridgewood High School. She married her husband, the late Robert E. Vincent, in November of 1945. He died on March 10, 1983. In the early 1940’s she had worked at the Metropolitan Life Insurance Company in New York City.
While in Pittsfield Mrs. Vincent was employed as the parish secretary at St. Stephen’s Episcopal Church in Pittsfield from 1970 until her retirement in 1981. She was very active at St. Stephen’s, having served on the altar guild and with the St. Mary’s Chapter. She also did many hours of volunteer work at the church throughout the years. She was also a member of the Windsor Council on Aging. She leaves two sons; Jeffrey R. Vincent and his wife Sharon of Lanesboro and Brian R. Vincent and his wife Patricia of Pittsfield. Four grandchildren; Mark R. Vincent, Robin Vincent Olson, Brad M. Vincent and Erin Elizabeth Vincent. She also leaves two great grandsons; Sean M. Vincent and Ryan M. Vincent. She was predeceased by two brothers; George and Edward Hodgetts.

FUNERAL NOTICE: Funeral services for Anna C. Vincent who passed away December 3, 2017 will be held Friday at 11:00 AM at St. Stephen’s Episcopal Church conducted by the Rev. Cricket Cooper, rector. Burial will follow in St. Joseph Cemetery. There are no calling hours. Memorial donations in memory of Anna may be made to Hospice Care in The Berkshires in care of the DERY FUNERAL HOME, 54 Bradford Street, Pittsfield, MA 01201 which is handling arrangements. To share a memory or condolence with the Vincent family please visit www.deryfuneralhome.com


To send flowers to the family or plant a tree in memory of Anna C. Vincent (Hodgetts), please visit our Heartfelt Sympathies Store.