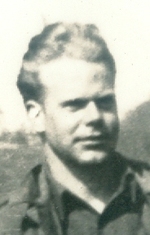 Alvin W. Brent, 96, of 18 Edgemere Rd, Dalton, MA passed away on Friday, April 28, 2017 at his home. He was born the oldest of two children in Manchester, NH on March 10, 1921, the son of the late Frank and Laurie Follensby Brent. Alvin proudly served his country in the United States Army during WWII having fought in Europe during the Battle of the Bulge. After the war, he came straight to Pittsfield. He was married to the late Betty Jean Miles Brent for 59 years. They were married December 20, 1945. She passed away on August 3, 2005. Al was employed at General Electric in the Transformer Division for 38 years. He retired on January 1, 1983. When Alvin wasn’t working he loved to be with his family. He loved golfing and was a member of Bas-Ridge Golf Club in Hinsdale since 1984. He took great joy in teaching his daughters and grandsons the great game of golf. He also enjoyed gardening, playing cards, painting, and wood working. Family was the most important thing to him. He leaves two daughters; Patricia Brent-Loehr and her husband James of Peru and Bethany J. Ano and her husband David of Virginia Beach, Virginia. Five grandsons; Robert Cavanuagh and his wife Robin, Andrew Cavanaugh, Gregory Dorval and his wife Gabriella, James Ano and his wife Siobhan and Brian Ano and his wife Carolin. He also leaves his son-in-law: Joseph Dorval of Washington, MA and ten great-grandchildren. He was predeceased by a daughter; the late Judith L. Dorval who passed away in 2000 and by his sister; the late Marilyn Demers.

FUNERAL NOTICE: A private graveside service with military honors for Alvin W. Brent who passed away April 28, 2017 will be held in Ashuelot Cemetery in Dalton. There are no calling hours. Memorial donations in memory of Al may be made to Soldier On in care of the DERY-FOLEY FUNERAL HOME, 890 Main Street, Dalton, MA 01226 which is handling arrangements. To share a memory or condolence with the family please visit www.deryfuneralhome.com


To send flowers to the family or plant a tree in memory of Alvin W. Brent, please visit our Heartfelt Sympathies Store.