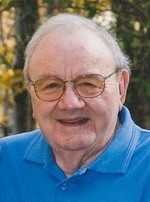 William "Bill" Custer was hilarious, loving and one of a kind. He passed away on Monday, June 12th, peacefully, at his Pittsfield home surrounded by those who love him so much. He lived a full and happy life. He battled health problems and personal loss the last year with customary class and dignity. Nearly a year ago, he lost the love of his life, Grace Custer, nee LaRosa, after serving as her dedicated and tireless caregiver.

Bill was born in 1931 to Manuel and Ellen Hagerty-Custer in West Springfield, MA. After an academic career he described as "checkered at best", he graduated from St. Joseph's High School in 1949. He decided to join the U.S. Navy but because of his age, he needed parental permission. He recalled they were all too eager to hand him over to "Uncle Sam" and their signatures were on the paperwork before he even finished his request. He served four years and often bragged that during the Korean War he successfully protected dozens of Mediterranean bars and taverns from enemy invasion. After an honorable discharge he met, courted, coerced and eventually married the woman who would be his wife for 61 years. Their love and unwavering commitment to each other will forever serve as an example of what a marriage could and should be.

He coached Little League for years and had a long and rewarding career at General Electric. Among other assignments, he worked on the Polaris and Trident projects, in Power Transformers, Ordnance and Regulators, served as Group Leader and gleefully retired at age 57. He spent the better part of the next 30 years golfing, cursing then praising the Red Sox, vacationing in Myrtle Beach, loving his wife and children and spoiling his grandchildren. He was sentimental but personally tough. He loved a bargain but was exceedingly generous. He was silly and thoughtful. He was unrelentingly positive and grateful for his many blessings.

Bill is survived by his son Chuck Custer and his wife Linda of Latham, NY, his son Bill Custer of Terryville, CT and his daughter Teresa Custer-Campbell and her husband Tony of Pittsfield. He is also survived by seven grandchildren who, by his admittedly biased yet accurate assessment, are all brilliant and beautiful. They are Cory, Scott, Michaela, Collin, Quinlan, Karinna and Jillian. Other survivors include his brother and "Song and Dance Man" partner, Chuck Custer and Chuck's wife Barbara who live in Michigan, brother-in-law and Navy cohort Charlie Fuller of Pittsfield, his beloved sister-in-law, Mary Berti of Sudbury, MA, and a dozen cherished nephews and nieces, their spouses and children.

FUNERAL NOTICE Calling hours will be FRIDAY, JUNE 16, 2017 from 4 to 7 PM at the DERY FUNERAL HOME, 54 Bradford St., Pittsfield. Funeral services will be private with burial in St. Joseph Cemetery. In lieu of flowers, donations may be made to the Jimmy Fund or Hospice Care in the Berkshires, both in care of the the funeral home


To send flowers to the family or plant a tree in memory of William ""Bill"" Custer, please visit our Heartfelt Sympathies Store.