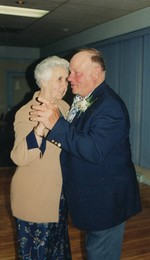 Born in New Britain, Conn., a daughter of Frank and Ruth Jackson Jester, she was a graduate of Pittsfield High School.

Mrs. Robinson was employed by General Electric Company in Financial Technical Support in the Ordnance Systems Division. She retired with over 25 years of service.

Wanda was a farm woman at heart. Nothing brought her more pleasure than to be driving her
farm vehicles, especially her Kubota.

She and her husband enjoyed spending time at their cottage in Raymond, Maine.

She was pre-deceased by her siblings, Betty Bridgham and Irving Jester, as well as Frankie and Ruthie Jester, both of whom died shortly after birth.


FUNERAL NOTICE: Graveside services for Wanda Jester Robinson were private with burial in
Mountain View Cemetery in Lanesborough. A celebration of life is being planned
for Spring 2021. In lieu of flowers, memorial contributions may be made in honor of Wanda’s rescue dog, Joy, to No Greater Love Animal Rescue of Buhl, Alabama, in care of DERY FUNERAL HOME, 54 Bradford Street, Pittsfield.