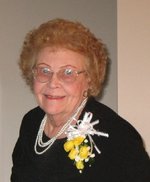 Ruth E. George, 100, a Schenectady, NY native passed away on Nov. 15, 2017 at Berkshire Place, Pittsfield, MA.
Ruth Elizabeth was the daughter of David E. and Trancy (Decker) Giegengack, born July 20, 1917. She graduated from Nott Terrace High School and Albany Business College. She began her career at General Electric until her marriage to William Tindall George on June 18, 1938.
She then went to work in the accounting department of A. Wayne Merriam because during the depression, married couples could not both work for GE. During World War II she returned to GE as a recruiter and interviewer in the Personnel Dept. She retired in 1947 to raise her daughter, returning to GE in 1966. She was a Specialist in Communication and Orientation in Turbine Relations, Foundry Department where she earned four Managerial awards and two GE Centennial Program awards. She was proud of aiding in the settlement of pattern makers brought over from England. She was on the Board of the Schenectady Chapter of the American Red Cross for 25 years, serving as chair of the day for Bloodmobiles, editing their newsletter and serving as Treasurer of the Air Show. She earned the Clara Barton Volunteer Award for her dedication to the Red Cross.
When she retired in 1979 she began genealogy research, traveling in NY, Canada, The Netherlands and East Germany, finding family along the way. It was through her efforts that the international Giegengack society was formed linking the family world wide. She loved staying in touch with her family and friends, remembering folks with cards and phone calls.
Hobbies included playing the piano, tennis as a youngster, sewing, knitting, needlework, furniture refinishing, collecting antiques, playing bridge and organizing yearly garage sales.
Her loves included liverwurst, fresh fruit, ice cream, jelly beans, the NY Yankees, Union College, Buicks, pretty dishes, Christmas, dolls and cats. She loved her home town of Schenectady as well as GE. She lived in Lake Placid a short time after her marriage then to Bloomington-Normal Illinois when her husband was transferred. They returned to Schenectady in 1961. Due to her failing health in 2009, her daughter moved her to Independent Living at Devonshire in Lenox, MA. In 2013 she moved to nursing care at Berkshire Place.
She was predeceased by her husband, Bill in 2000. She is survived by her daughter Nancy McNabb and her husband Al of Pittsfield as well as numerous cousins.
A memorial service will be held on Wednesday, November 29th at 1:00 PM at First Reformed Church, 8 North Church St. Schenectady. Coffee and cookies will follow in the Dirck Romeyn Room at the church.
Burial will be a later date in Mountain View Cemetery, Castleton-on-Hudson, NY
Memorial contributions in Ruth’s name can be made to the American Red Cross, 33 Everett Road, Albany, NY 12205. To share a memory or condolence with the George family please visit www.deryfuneralhome.com


To send flowers to the family or plant a tree in memory of Ruth E. George ( Giegengack), please visit our Heartfelt Sympathies Store.