In Memory of
Rowland  Greenough
Skinner
1914 - 2017
Click above to light a memorial candle.
Memorial Candle Tribute From
Dery Funeral Home
"We are honored to provide this Book of Memories to the family."
View full message >>>
Send Flowers
Menu 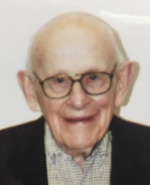 Rowland Greenough Skinner, 103, passed away peacefully on Saturday evening, November 18, 2017, in his home at Sweetwood of Williamstown. Born in Bloomfield, NJ on July 5, 1914, he was the only child of Rowland H. and Margaret C. (Greenough) Skinner. Rowland grew up in New Rochelle, NY. When his mother died in 1928, Rowland’s family enrolled him at the Loomis School. He graduated from Loomis in 1931, Haverford College in 1935, and Harvard Business School in 1937. Rowland then began his employment at Haskins & Sells (now Deloitte & Touche) and was certified as a public accountant in NY in 1940. In March 1942, he enlisted in the army and attended officer candidate school in Miami Beach, FL. Serving through the war, he became a statistical control officer with the 29th Tactical Air Command, attaining the rank of captain. After resuming civilian life, he returned to Haskins & Sells and became a principal; ten years later he left to become comptroller, then treasurer, and finally a director of Master Video Systems, Inc., until his retirement in 1981.
Rowland married Delma M. Stickell on May 19, 1944, in Salt Lake City, UT; they met while he was stationed as an army trainer and adjutant on the Hastings College campus. Post-war, they lived first in Westchester County, NY, followed by thirty-three years on Long Island, NY. Rowland’s love of boats—which included his father’s stately 1920s Elco—kept him close to the water; in later years, Rowland and Delma enjoyed both domestic and international travel, especially by ship. Highlights of those trips include Scandinavia and Northern Europe, the Nile, the Dalmatian Coast, and the Black Sea. On a smaller scale, they enjoyed canal cruises in England and France. While a CPA by profession, history was his intellectual passion. In particular, he studied military history—especially the Civil War. Rowland wrestled in college and in recent years safely survived many falls, always announcing “I know how to fall!” A lively, eccentric man, with eclectic interests, Rowland studied transportation history and poured over train and shipping timetables, deck plans for ocean liners, and canal and river maps. He also loved music, especially Wagner’s Ring Cycle and symphonies and operas by Russian composers; when visiting the USSR in 1968, he sought out recordings of Shostakovich symphonies on the Melodiya label. He was courtly in his manners and would talk at great length about his interests with anyone who would listen.

Rowland is survived by Delma, his wife of seventy-three years, his daughter Pamela A. Skinner, and son-in-law Wayne Glaser. Rowland was predeceased by a son, Lawrence G. Skinner in 1971. Given his long life, most of Rowland’s close personal friends and business associates predeceased him as well. A dog lover his whole life—despite having been bitten several times in his childhood—Rowland was also predeceased by his English bulldog Butch and the family basset hound mix, Long John.

The family would like to thank the staff of Hospice of Western and Central Massachusetts, in particular Linda Michaels and Dominic Negri, for their extraordinary care and concern in Rowland’s last months, as well as the Health & Wellness staff of Sweetwood, including the unflappable Taylor Conrow. Dery Funeral Home handled the cremation arrangements, and burial will be private. A celebration of life will be held at Sweetwood of Williamstown in the coming weeks. In lieu of flowers, please consider a memorial contribution to one of these organizations: United Cerebral Palsy (ucp.org), Nature Conservancy (www.nature.org), Planned Parenthood Federation of America (www.plannedparenthood.org), or National Trust for Historic Preservation (savingplaces.org) in care of the DERY FUNERAL HOME, 54 Bradford Street, Pittsfield, MA 01201. To share a memory or condolence with Rowland's family please visit www.deryfuneralhome.com


To send flowers to the family or plant a tree in memory of Rowland Greenough Skinner, please visit our Heartfelt Sympathies Store.