To share your memory on the wall of Robert Wuinee, sign in using one of the following options:

Print
Robert Emil Wuinee, 84 a longtime resident of both Dalton and Pittsfield, MA, passed away Saturday, December 21, 2019 at Bishop Wicke Health and Rehabilitation Center in Shelton, CT after a struggle with Alzheimer’s.

Born in Pittsfiel... Read More
Robert Emil Wuinee, 84 a longtime resident of both Dalton and Pittsfield, MA, passed away Saturday, December 21, 2019 at Bishop Wicke Health and Rehabilitation Center in Shelton, CT after a struggle with Alzheimer’s.

Born in Pittsfield on January 28, 1935 Bob was the son of Evelyn Morin (Stowell) and Emil Wuinee Jr.

Bob was a 1952 graduate of Pittsfield High School where he lettered in Baseball and Track and awarded The William L. Pierson Medal. His love for baseball continued after he graduated and he was fortunate to play Triple A ball with the Pittsfield Chiefs. At the end of his baseball playing years Bob began playing softball in various leagues where he played both shortstop and center field. When he could no longer play the sport he loved he turned his attention to umpiring and coaching. He coached little league and was well known as an umpire all over Berkshire County. He umpired all levels of baseball and softball from t-ball to American Legion Baseball and Adult softball leagues. If anyone needed an umpire, Bob was your man! Bob was also always there to support and assist in the many sporting events of his children, which included baseball, softball, youth football and competitive swimming.

Even after he stopped umpiring he continued to enjoy bowling, bocce and dancing at the Itam and the Home Club. Those who knew him best understood his “passion” for each of these activities. Even in the later stages of his illness, Bob remained a loyal fan of the Boston Red Sox and New England Patriots as he was able to watch, and then listen to TV and Radio coverage of games.

Bob was a United States Army Korean War Veteran and a proud and active member of the Dalton American Legion for 46 years. He was fortunate enough to be able to go on a Leatherstocking Honor Flight to Washington D.C. in June 2016 with fellow Veterans and visited all of the War Memorials which he truly enjoyed.

Employed full time by General Electric as a requisition clerk, Bob retired after nearly 40 years. He continued working after his retirement from GE as he went on to become a security guard at the Federal building in Pittsfield, MA.

Bob always worked hard to provide for his family leaving in memory two daughters, Sharon Spicer (and her husband Paul) of Shelton, CT, Debra Massey of Pittsfield, MA and his son, David Wuinee currently residing in St. Thomas, US Virgin Islands. He was predeceased by his ex-wife, Barbara J. Wuinee. He is also survived by his sister, Carol Henault of Hancock, MA.

Additionally, he leaves behind his grandchildren, Lauren and Jennifer Spicer, and Richard Massey III. Bob will be missed by his many cousins, nieces, nephews, grandnieces and grandnephews.

FUNERAL NOTICE: Funeral services for Robert E. Wuinee will be held, MONDAY, January 6, 2020 with a Liturgy of Christian Burial at 10:00 am at St. Agnes Church in Dalton, celebrated by Rev. Christopher Malatesta, Pastor. Burial will follow in Pittsfield Cemetery. Calling hours will be held, SUNDAY, January 5, 2020 from 4:00-7:00 pm at DERY-FOLEY FUNERAL HOME, 890 E. Main St, Dalton, MA. In lieu of flowers, memorial contributions may be made in his name to the Dalton American Legion Post 155, in care of the funeral home.
Read Less

Plant a Tree in Memory of Robert
Plant a tree 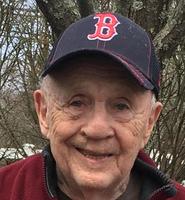