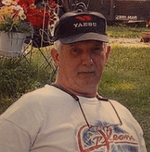 Robert E. Flood, 72, of Pittsfield, MA, passed away August 27, 2020.
He was born in Pittsfield on July 19, 1948 to Marie Beckman Boyer.
Bob attended Pittsfield High School and served in the Vietnam War from 1968-1971. He was honorably discharged from the Army National Guard in 1981. He was an entrepreneur and also worked as an electrical engineer for Time Warner Cable, until he retired in 2012. Bob was an avid lover of HAM radio and was a member of Northern Berkshire Amateur Radio Club. He also loved fishing and riding his motorcycle.
Bobby leaves behind his daughter, Deana Lovellette and husband Scott of Pittsfield; three brothers, Steve Flood of Pittsfield, Richard Flood of Dalton, David Flood of Cheyanne, WY; a sister, Linda Smith and his mother, Marie Beckman Boyer both of Rocky River, OH; as well as five grandchildren; Jason Newton, Nicholas Martinico, Jessica, Cody and Courtney Lovellette. He also leaves behind two great granddaughters. Bob will be greatly missed.
There will be a private celebration of life for immediate family. Memorial contributions may be made in Bob’s name to NoBARC in care of DERY FUNERAL HOME, 54 Bradford St, Pittsfield, MA 01201.
W1RZO signing off.