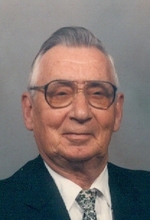 : Robert W. Alletson, 96, of 29 Otis Avenue in Dalton passed away on Friday, April 28, 2017 at Mt. Greylock Extended Care Facility in Pittsfield. Born on April 5, 1921 in Plainfield, MA he was a son of the late Frank and Muriel Packard Alletson. A longtime Dalton resident, he was educated in Plainfield schools and was a graduate of Sanderson Academy in Ashfield.
He married his wife, the late Irma Arial Alletson in January of 1949. She died in 1973. Mr. Alletson was employed as a papermaker at Byron Weston Paper Mill in Dalton for forty years. He retired in 1980. In his younger years he had worked at the Betts Manganese Mine in Plainfield during the war. He was a member of First Congregational Church of Dalton where he served as a church deacon. Bob was also a life member of the Dalton Lions Club and the “Over the Hill Gang”, a coffee and conversation club that met every Thursday for many years at the former Bonanza Restaurant. He enjoyed bird watching, crossword puzzles, Jumble puzzles and meeting his friends at the Dalton Restaurant for coffee. He was also a longtime fan of the Boston Red Sox. He leaves his daughter; Barbara J. Tanski and her husband John of Dalton. A brother; Frank “Buzz” Alletson of Plainfield, MA and his nephews; Keith Alletson, Kyle Alletson, and Lee Alletson. He also leaves his “step son”; Gary LeBeau of Pittsfield. He was predeceased by his sister-in-law; Frances Alletson, his niece; Jan Miller and by his longtime companion; Ruth LeBeau.

FUNERAL NOTICE: A graveside service for Robert W. Alletson who passed away April 28, 2017 will be held Saturday, May 6, 2017 at 11:00 AM in the West Cummington Cemetery on Route 9 conducted by the Rev. Henry Pasqual, pastor of First Congregational Church in Dalton. The family invites everyone to a Celebration of Life for Bob following the graveside in the dining room at First Congregational Church in Dalton. There are no calling hours. Memorial donations in memory of Bob may be made to the Dalton Lions Club or to First Congregational Church of Dalton, both in care of the DERY-FOLEY FUNERAL HOME, 890 Main Street, Dalton, MA 01226 which is handling arrangements. To share a memory or condolence with the family please visit www.deryfuneralhome.com


To send flowers to the family or plant a tree in memory of Robert W. Alletson, please visit our Heartfelt Sympathies Store.