In Memory of
Richard
Russo
1947 - 2018
Click above to light a memorial candle.
Memorial Candle Tribute From
Dery Funeral Home
"We are honored to provide this Book of Memories to the family."
View full message >>>
Memorial Candle Tribute From
Rick, Joanie, and Ryan Russo
"We love and miss you Dicky/ Poppi <3"
View full message >>>
Send Flowers
Menu 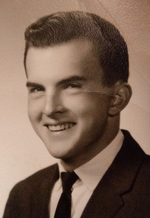 He was born January 11, 1947 in Pittsfield, son of the late Gaetano F. Russo and Helen B. Hoag Russo. Richard was predeceased by a brother Robert Russo and a nephew David Russo.

He was a 1965 graduate of Pittsfield High School. Richard was a veteran of the Vietnam War and did two tours in Saigon, Vietnam. He served in the U.S. Air Force. Richard was employed by the City of Pittsfield until retirement. He previously worked for White Star, Pittsfield Supply and Giftos.

Richard enjoyed puzzles, war movies and his favorite TV shows such as M.A.S.H., Price is Right, and Lets Make a Deal. He also enjoyed spending time with his children and grandchildren.


FUNERAL NOTICE: Funeral services for Richard G. Russo, Sr., Friday February 9, 2018 at 11:00am at Dery Funeral Home, 54 Bradford Street, Pittsfield, with Rev. Peter A. Gregory officiating. Burial will follow in St. Josephs Cemetery. Calling hours will be Thursday from 4:00-7:00pm at the funeral home. In lieu of flowers, memorial donations may be made to Dery Funeral Home to help defray funeral costs.


To send flowers to the family or plant a tree in memory of Richard Russo, please visit our Heartfelt Sympathies Store.