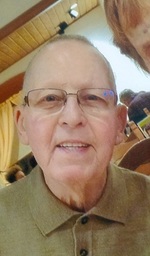 Richard Wyatt Maynard passed away on Dec. 13, 2017, two days before his 84th birthday, during surgery at Massachusetts General Hospital in a brave fight against colon cancer.

Born in Lanesborough on Dec. 15, 1933 to Wyatt and Helena Maynard, Richard served for two years in the United States Army from 1953 to 1955, including deployment in Korea during the Korean War. After returning home, Richard worked at General Electric until his retirement in 1992. He also served as a member of the Lanesborough Fire Department and then as a Lanesborough reserve police officer until retiring at the age of 65. An avid sportsman, Richard enjoyed fishing and hunting, and was fond of the outdoors. Richard liked tending to his garden, using his tractor around the yard, working in the garage, telling stories, and cooking breakfast for his family on the weekends. He took great pride in his children and grandchildren and adored his many great-grandchildren. He was a fan of country western music and was looking forward to seeing Deirdre Reilly again this summer. Richard was active in his church and a member of the VFW in Lanesborough and Dalton. He was a man’s man with a great sense of humor and solid character. Throughout his battle with cancer, Richard demonstrated amazing faith, willpower, strength, and determination.


To send flowers to the family or plant a tree in memory of Richard W "Dick" Maynard, please visit our Heartfelt Sympathies Store.