In Memory of
Richard  A.
Nicholas Sr.
1933 - 2017
Click above to light a memorial candle.
Memorial Candle Tribute From
Dery Funeral Home
"We are honored to provide this Book of Memories to the family."
View full message >>>
Send Flowers
Menu

Obituary for Richard A. Nicholas Sr. 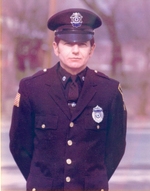 Richard A. Nicholas Sr. 84, of Dalton passed away peacefully at home after a lengthy and valiant fight. Born in Lee, MA on April 22, 1933, the son of the late Addison and Edith (Morin) Nicholas, he attended local schools and graduated from Pittsfield High School in 1951. He proudly served in the United States Marine Corps from 1953-1956 and was stationed in Japan. In November 1967 Richard was appointed as reserve police office with the Dalton Police Department and was appointed a full-time office the following February. In May of 1979 he earned the rank of sergeant. In January of 1985 he was appointed Chief of Police, a position he held until his retirement in September of 1992. Richard was responsible for modernizing the police department, with Dalton being the first department in Berkshire County to implement videotaping of OUI arrests.
In addition to his professional accomplishments, Richard was a member of many organizations. He was a former member of the Dalton Rod & Gun Club and a member of the Dalton American Legion Post #155 where he served in the honor guard. He was a member of the Massachusetts Police Association, Western Massachusetts Chiefs of Police Association and the Massachusetts Chiefs of Police Association. Richard also served on the Council on Aging and on the Dalton Community Cable Board. While in this position he was instrumental in starting the Veterans History Project, which chronicled the stories of local World War II veterans. He filed the applications with the Library of Congress to ensure the preservation of this historic and essential undertaking. Under his direction this program flourished and is still operating to preserve these important stories to this day. It was one of his proudest accomplishments.
Richard was known for his quick wit and wry smile with an unparalleled sense of humor. An avid outdoorsman, he loved nothing more than fishing with his friends both locally and on Lake Champlain. He also enjoyed playing cards with his friends at the Ralph Froio Senior Center and was a life-long supporter of the New York Yankees. A communicant of Saint Agnes Church in Dalton, he was steadfast in his faith.
Richard is survived by his loving wife, Alta (Nichols) Nicholas, with whom he would have celebrated 60 years of marriage on November 9. He also leaves behind his children, Richard A. Nicholas, Jr. and his wife Heather of Palm Bay, Florida, Robert E. Nicholas and his wife Gena of Rootstown, Ohio, Laura L. Szczepaniak and her husband Robert of Lanesborough, MA. He is also survived by his son-in-law Edward McCraw of Roanoke, VA.
Richard leaves behind many grandchildren who adored him, Richard A. Nicholas, III, Jake Nicholas, Dustin McCraw, Brian McCraw, Nicole McCraw, Hayden Daugherty, Julia Szczepaniak, Louis Shacar, Joseph Shacar, and Chad Tarves with whom he had a special relationship that brought him tremendous joy. He also leaves two great grandchildren Ryland McCraw and Skylar McCraw.
He was predeceased by his daughter Kathleen A. McCraw who passed in February of 2016.
Funeral Notice – Funeral Services for Richard A. Nicholas Sr. 84, who passed away June 16, 2017 will be held Wednesday June 21, 2017 at 10a.m. with a Liturgy of Christian Burial at St. Agnes Church in Dalton, celebrated by Rev. Christopher A.
Malatesta, Pastor. Burial will be private and at the convenience of the family. A calling hour will be held prior to the funeral service beginning at 830a.m. until 9:30a.m. at DERY-FOLEY FUNERAL HOME, 890 E. MAIN ST., DALTON. Military and Police honors will follow the funeral service outside of St. Agnes Church. In lieu of flowers memorial donations in Richard’s memory can be made to his wife; Alta Nicholas to help defray costs, in care of the funeral home. To share a memory or condolence with Richard’s family please visit www.deryfuneralhome.com

To send flowers to the family or plant a tree in memory of Richard A. Nicholas Sr., please visit our Heartfelt Sympathies Store.