To share your memory on the wall of Regina Favre, sign in using one of the following options:

Born in Pittsfield on May 9, 1932, she was the daughter of the late Stanley C. and Della M.... Read More
Regina Margaret (Danford) Favre, 87, formerly of Rose Manor, died Tuesday, September 17, 2019, at Springside Nursing and Rehabilitation Center.

Born in Pittsfield on May 9, 1932, she was the daughter of the late Stanley C. and Della M. Rhoades Danford. Following her mother’s death, she was raised by the Rhoades and Chapman family. She attended Pittsfield schools and was a 1950 graduate of Pittsfield High School.

Primarily a homemaker, Mrs. Favre was a clerk for ten years at the former S&H Green Stamps store.

From 1990 until 2004, Mrs. Favre resided at Woodlawn Estates in Stephentown, N.Y, where she was active in the Stephentown and Berlin Senior Centers.

FUNERAL NOTICE: Funeral services will be held Wednesday, September 25, with a Liturgy of Christian Burial at 10:00 a.m., at St. Joseph Church celebrated by Rev. Msgr. Michael A. Shershanovich, Pastor. Burial will follow in St. Joseph’s Cemetery. Calling hours will precede the service from 8:45 to 9:45 a.m. at DERY FUNERAL HOME in PITSFIELD. In lieu of flowers, memorial contributions may be made to a local food pantry of your choice, in care of the funeral Home, 54 Bradford Street, Pittsfield.
Read Less

To send flowers to the family or plant a tree in memory of Regina Margaret Favre, please visit our Heartfelt Sympathies Store.

Receive notifications about information and event scheduling for Regina

We encourage you to share your most beloved memories of Regina here, so that the family and other loved ones can always see it. You can upload cherished photographs, or share your favorite stories, and can even comment on those shared by others. 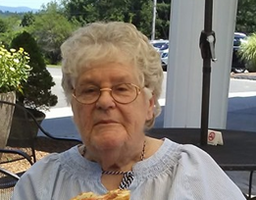