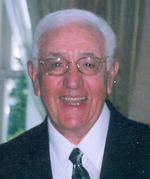 Our lives have been changed and our hearts are broken to announce that our dearest Raymond Joseph George, of Pittsfield, MA has passed away on January 16, 2018. He was 89.

Raymond was born February 12, 1928 in Pittsfield, MA, the firstborn son of the late Selma Nofal George and Samuel B. George. He was educated in the Pittsfield school system.

Raymond spent the years 1951-1954 as a guard in the Air Force Police Squad, 421st Division. He earned the Korean Service Medal, the U.N. Service Medal, and the National Defense Service Medals for his efforts and loyalty.

Along with his two brothers, Robert K. and Donald W. George of George Brothers Reality, Raymond was in the real estate business for many years. He was co-manager of George’s Liquor Store with his brother Donald, until they retired and later sold the business.

After a long bout with throat cancer, he had to learn to speak again, and then was able to continue to sing, a great joy of his that began while stationed overseas and serving his country.

A kind and caring man, he treated everyone he met with utmost respect, and enjoyed an excellent life with family and friends. He loved to play golf at the Pittsfield Country Club, enjoyed bow hunting, and wintered for many years at his second home in Pompano Beach, Florida.

Thanks to all of the wonderful nurses and caregivers at Hospice, the EMTs, and all the staff at both Mount Greylock Extended Care Facility in Pittsfield and Craneville Place of Dalton. Thank you to the Veterans Administration and to our family, who loved him so.

Rest comfortably Raymond, we love you.

We're sad he’s gone, but smile because he was here. He’s not truly gone as long as he lives on in our hearts.

Funeral Notice: Funeral services for Raymond Joseph George will be held, Saturday January 27, 2018 at 10am at Dery Funeral Home in Pittsfield. Burial will follow in Pittsfield Cemetery with Military Honors. Calling hours will be held Friday January 26, 2018 from 4:00pm-7:00pm at the funeral home.


To send flowers to the family or plant a tree in memory of Raymond J George, please visit our Heartfelt Sympathies Store.