In Memory of
Priscilla  R.
Berti (Barthe)
1928 - 2017
Click above to light a memorial candle.
Memorial Candle Tribute From
Dery Funeral Home
"We are honored to provide this Book of Memories to the family."
View full message >>>
Send Flowers
Menu 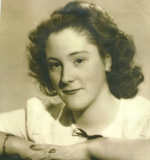 Priscilla R. Berti, 88, of 233 Railroad Street, Cheshire, died Friday, November 10, 2017, at Craneville Place of Dalton. Born in Adams on November 16, 1928, the daughter of Henry and Juliette Marin Barthe, she was educated in Adams schools and was a 1946 graduate of Adams High School.
Mrs. Berti had been employed at Sprague Electric Company and later at General Electric Company where she worked her way up to a management position. She retired in 1976. Following retirement, she was a Crossing Guard at the Cheshire Elementary School. Her six years there were the greatest joy of her working career.
Mrs. Berti was a communicant of St. Mary of the Assumption Church where she sang
in the choir, was a CCD teacher, a member of the Rosary Society, and served as a Eucharistic Minister. She also served on the Board of Directors of the Cheshire Senior Center and the Cheshire Council on Aging.
Priscilla was home- and family-oriented. She also enjoyed reading, gardening, especially flowers, and traveling, especially taking cruises.
She leaves her husband, Michael M. Berti, whom she married April 22, 1950, in Notre Dame Church in Adams.
She is also survived by a daughter, Karen L. Clark (husband William) of Cheshire; a son, Stephen M. Berti (wife Lynn) of Cheshire; seven grandchildren and seven great grandchildren; many nieces and nephews; and her beloved dog, Poco.
She was pre-deceased by a sister, Theresa Lamb and two brothers; Marin Barthe and Donald Barthe


FUNERAL NOTICE:
Funeral services for Priscilla R. Berti will be held Wednesday, November 15, 2017 with a Liturgy of Christian Burial at 9:30 a.m., at St. Mary of the Assumption Church in Cheshire celebrated by Rev. Matthew Guidi. Burial will follow in Bellevue Cemetery. There are no calling hours. In Lieu of flowers, memorial contributions may be made to Craneville Place of Dalton Activities Fund in care of DERY-CHESHIRE FUNERAL HOME, P.O. Box 445, Cheshire, 01225.


To send flowers to the family or plant a tree in memory of Priscilla R. Berti (Barthe), please visit our Heartfelt Sympathies Store.