In Memory of
Pota
Helitois
1918 - 2017
Click above to light a memorial candle.
Memorial Candle Tribute From
Dery Funeral Home
"We are honored to provide this Book of Memories to the family."
View full message >>>
Send Flowers
Menu 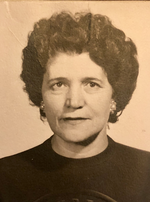 PITTSFIELD, MA - Pota Heliotis, 99, formerly of 176 Columbus Avenue died on December 14, 2017 at North Adams Commons. Pota was born in the township of Georgitsi in Greece on November 10, 1918 to Christos and Angelina (née Sarantos Kourembi). Pota was one of four children: sisters Fotini and Marigoula and brother Georgios.
Pota came to the United States in 1954 and received her Citizenship in 1964. She worked at the Berkshire Coat Factory as a seamstress. Pota loved to knit and her creations still adorn the houses of loved ones. Pota sang in the choir at St. George Greek Orthodox Church, was active in the Philoptochos and participated in many of their bakes sales. She received The Ministry Award from the Greek Orthodox Metropolis of Boston in 2003 for her outstanding service to the church, and The Archbishop Iakovos Distinguished Service Award from the National Forum of Greek Orthodox Church Musicians in 2010.
Pota is survived by her great-nieces, Paula Athans and Christine Russo and the wife (Maria) of her great-nephew, Bill.

To send flowers to the family or plant a tree in memory of Pota Helitois, please visit our Heartfelt Sympathies Store.