Obituary for Margaret B. "Peg" Brennan 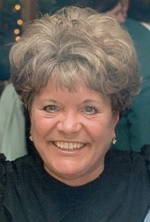 Margaret “Peg” B. Brennan, 63, of 73 Daly Avenue, Dalton, died Sunday, June 18, 2017, at Berkshire Medical Center. Born in Pittsfield on July 28, 1953, the daughter of the late Robert L. and Ann T. Callahan Betit, she was a 1971 graduate of Wahconah Regional High School.
At the time of her death, Mrs. Brennan was employed as an Administrative Assistant at
Whiting Energy in Dalton. She had also been employed at Jacob’s in Dalton.
She adored and loved spending time with her grandchildren, spending time at the lake with her sister, and knitting. Her husband, James J. Brennan, died March 17, 2002.
Mrs. Brennan is survived by two sons, Matthew C. Brennan and his wife, Erin, of Providence, R.I., and Daniel C. Brennan of Dalton; a sister, Kathy A. Hoag of Dalton; two brothers, Lawrence Betit of Dalton, and Thomas J. Betit of Dalton; and her two grandchildren,
Keira A. Brennan and James P. Brennan. She was also predeceased by her brother; Robert G. Betit.


FUNERAL NOTICE:
Funeral services for Margaret “Peg” B. Brennan will be held Thursday, June 22, 2017 with a
Liturgy of Christian Burial at 10:00 a.m., at St. Agnes Church in Dalton celebrated by Rev. Christopher A. Malatesta, Pastor. Burial will follow in Ashuelot Cemetery. There are no calling hours. In lieu of flowers, memorial contributions may be made to the Boog Powell Memorial Fund in care of DERY-FOLEY FUNERAL HOME, 890 East Main Street, Dalton.


To send flowers to the family or plant a tree in memory of Margaret B. "Peg" Brennan, please visit our Heartfelt Sympathies Store.