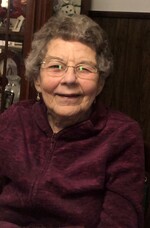 Marcia J. Brophy, 88, a lifelong resident of Dalton, died peacefully at her home on Sunday, January 24, 2021, with her daughter by her side and her beloved cat in her lap.

Born in Pittsfield on December 13, 1932, the daughter of Kenneth L. and H. Marguerite Burr Goodrich, Marcia was a 1950 graduate of Dalton High School.

Marcia was a devoted wife, mother, and homemaker. She worked outside the home, as well; first as a bookkeeper for Giftos Brothers wholesale vendors, and following its closure, for Henry V. Rabouin Transportation.


Marcia was a lifelong member of Morningside Baptist Church. She served as Church Clerk for many years, sang in the choir and was active in the Rachel Circle.

Marcia was a member of the Dalton Council on Aging and was a volunteer at the Dalton Senior Center greeting everyone with a friendly smile.

She is also survived by cousins, Dick and Joyce Lacatelle and Pat Pigott, as well as her cherished sister-in-law, Rosemary Boino and brother-in-law, Richard Brophy.

She was predeceased by her son, Timothy J. Brophy, who died February 12, 1993, and her sister, Judy Smart, and brother-in-law, Dick Smart.

FUNERAL NOTICE: Funeral services for Marcia J. Brophy are private with burial in Ashuelot Cemetery. In lieu of flowers, the family suggests sending a bouquet of flowers to a loved one or making a contribution to the charity of one’s choice. DERY-FOLEY FUNERAL HOME is in charge of arrangements.