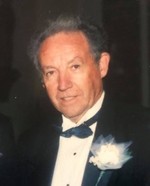 Marcel George Breault, Sr., 86 of Pittsfield, passed away April 24, 2020 at Springside Nursing Home.
He was born in Lyndonville, Vermont on April 25, 1933 to the late Joseph Raoul and Mary Angeline Leclerc Breault.
He was a 1951 graduate of St. Joseph High School and went on to serve in the US Airforce.
He worked in maintenance for many years for the MA State Highway Department and also for the City of Pittsfield, where he was the union president.
A communicant of the former Notre Dame Church, he was also a member of the Franco-American Club. He cherished his family and was the World’s Best Grandfather. He was always at his grandchildren’s sporting events, cheering them on. He was their biggest cheerleader.
He leaves behind his children, Marc Breault and wife Amy of Washington, MA, and Kimberly Breault of Pittsfield, MA and Rick Kidney of Dalton, MA; He was predeceased by his daughter, Kelley O’Mara. He also leaves his grandchildren, Sean O’Mara, Skye, Brittany, and Angel Breault, and Brianna Breault-Clary; and great-grandsons, Tyler and Zac; his siblings, Jeannine Potash, Richard and Joseph Maurice Breault. He was predeceased by his sister, Jackie Shaughnessy, brothers, Raymond, Raphael (Donald), Jerome, Fernand, Normand, and Bernard Breault. He was also predeceased by his former wife, Barbara Breault.
FUNERAL NOTICE: Due to COVID-19, a Liturgy of Christian Burial will be held at a later date, as well as a Celebration of Life. In lieu of flowers, memorial contributions may be made in his name to Wounded Warriors in care of DERY FUNERAL HOME, 54 Bradford St, Pittsfield, MA 01201.