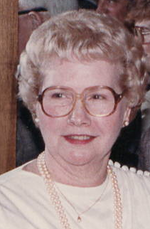 Born in Decatur, Illinois on February 22, 1920, to Paul and Bertha Williams Wiseman, she was a 1938 graduate of Decatur High School.

She married the late John H. Wells II on October 5, 1945. He predeceased her on February 24 2001. They moved to Pittsfield in 1946 and then to Cheshire in 1954. Mrs. Wells worked as an administrative assistant in Ordnance at General Electric for 38 years, from 1947-1985. Prior to that she worked for Western Union in Decatur.

The family would like to extend a personal Thank You to the nursing staff at Mt. Greylock Extended Care Facility for their compassionate care.

FUNERAL NOTICE: A graveside service for Mrs. Wells will be held, FRIDAY, August 24, 2018 at 1:30pm at Cheshire Cemetery. In lieu of flowers, memorial contributions may be made in her name to the Cheshire Fire Department or the First Baptist Church of Cheshire in care of DERY-CHESHIRE FUNERAL HOME, P.O. BOX 445, CHESHIRE, MA 01225


To send flowers to the family or plant a tree in memory of Mae Wells, please visit our Heartfelt Sympathies Store.