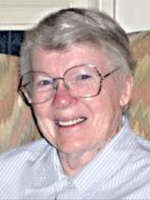 Madeline (Madge) DeSole-Neal Buerger died from the effects of COVID-19 on Monday, January 4, in her 98th year. The daughter of Geoffrey Stuart DeSole-Neal and Beatrice Osborne, she was born December 18, 1923, at Cass Lake, Michigan. Growing up she lived in Alabama, Arkansas, Ohio, and Kentucky. Her fondest memories of childhood were rooted in her experience with the Girl Scouts of America.

Madge was a proud 1947 graduate of Lake Erie College. An educator for half a century, she began her teaching career in Virginia, where she met her husband, the late Joseph F. Buerger. After their marriage they returned to Joe’s native Oneonta, NY, where their elder son Michael was born and where Joe was hospitalized for tuberculosis.

Upon his recovery they came to Miss Hall’s School in 1953, where Madge was a Physical Education instructor, and subsequently Director of Athletics, for decades. Miss Hall’s alumnæ will remember her energetic coaching, her organization of Blue-Gold activities, her leadership of the Athletics Association, and her unyielding insistence on the highest standards of effort and decorum. As AD she was a fierce advocate for women’s athletics, coaching many sports and championing field hockey and women’s lacrosse among independent schools. For years she also officiated at college field hockey matches across New England. At Miss Hall’s both the athletics office and the tennis award are named in her honor. In her later years at Miss Hall’s Madge served as Executive Secretary of the Alumnæ/i Association and as School Archivist. She retired in 1995.

Madge was a communicant of St. Stephen’s Episcopal Church throughout her years in Pittsfield, serving as a Parish Visitor taking succor and communion to shut-in parishioners. Many at St. Stephen’s will remember her more than twenty years in the handbell choir. In addition to bells, she also played the bugle, accordion, piano, and French horn, and was learning the flute when arthritis intervened.

She kept in close touch with her English family throughout her life, and England always had a special place in her heart. So did the Outer Banks of North Carolina, which she visited for years. Madge traveled widely in retirement: among her most memorable journeys were Alaska, Arizona, Bermuda, California, Florida, Newfoundland, Canada’s Northwest Territories (where she drove the Dempster Highway and saw the Arctic Ocean at Tuktoyaktuk), and Wyoming.

Predeceased by her parents, her brother Lt. Geoffrey E. Neal, and her husband Joe, she is survived by her son Michael E. Buerger (Belinda and step-grandchildren Harrison Renny and Andrea Renny), her son Geoffrey E. Buerger (Paula) and grandsons Colin, Brendan, & Ian Buerger, her cousin Roger Neal (Gill), her first cousins once removed Sheldon Neal, Emily Neal, and Timothy Neal, her nephew William Clemons, and her niece Margaret Clemons. When she died she was eagerly anticipating the birth of her first great-grandchild.

The funeral service will be held at St. Stephen’s Episcopal Church in Pittsfield. Because of current circumstances, we regret that attendance must be restricted to family. Dery Funeral Home is handling the arrangements. In lieu of flowers, gifts in memoriam may be made to St. Stephen’s Church or Miss Hall’s School.