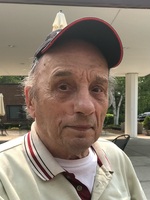 Leo P. Sondrini, passed away peacefully, on January 19, 2021. He joins his wife, Ann Moynihan, on the very day, they would have celebrated their 70th wedding anniversary.

Leo was born in Farnhams, MA on June 3, 1930. He was a lifelong resident of Berkshire Village, known for his quiet and kind demeanor and always willing to give you the shirt off his back or literally the baseball cap off his head.

Leo worked at Adams Super Market, where he drove, washed and pampered his truck every day for 27 years.

He volunteered at the Lanesborough Recycling, as a community service, but called it a favor to him, grateful for the opportunity to talk with people and give their dogs treats. Leo loved to talk and tell a good story.

Leo was a member of the North American Martyrs Church and later St. Mary’s in Cheshire MA.

He was always available, with his brother-in-law Bill Delmolino, to make sure that the Berkshire Spring Water was running or anything else needed in the village.

He may best be known as the person who almost everyone called “just a really good guy”.
In his last years, without his loving wife Ann who pre-deceased him in 2015, Leo suffered from dementia and was cared for by the incredible people at Springside Nursing home, as well as the private and loving care that he received from Gina Drake who treated him like the special man he was.

Services will be private and there will be no calling hours. The family requests any donations be sent to the Cystic Fibrosis Foundation through DERY FUNERAL HOME, 54 Bradford St, Pittsfield, MA 01201.