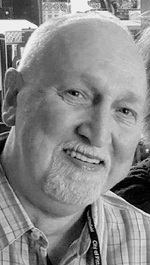 Larry “Sandy” E. Mullett, Jr., 66, of 55 Crane Avenue, Dalton, died Sunday, May 7, 2017, at Berkshire Medical Center. Born in Pittsfield on August 24, 1950, a son of Lawrence E. Mullett, Sr., and Marion Agnes Lapp Mullett, he was a graduate of Pittsfield High School.
A Vietnam War veteran, Mr. Mullett served with the United States Army from February 1970 until December 1971. Mr. Mullett was employed by the City of Pittsfield Highway Department for many years. He was a member of the UFCW Local 1459 Union for 30 years while employed at Stop & Shop.
He enjoyed playing golf, bowling, being a chaperone for the Special Olympics, and spending time with his family and friends.
Mr. Mullett leaves his wife, the former Colleen Soldo, whom he married September 15, 2006. He is also survived by his children: Joel Mullett (Tara) of Pittsfield; Joshua Mullett of Dalton; Lori Lussier (Josh), of Dalton; Matthew Hunter (Catherine) of Kansas; and Megan Tardibuono (Vincent), of Pittsfield; his five grandchildren Mitchell, Zander, Lucas, Parker and Phia, who were the lights of his life; as well as his sister, Mary Melanson (Paul) of Savoy; and brothers, Billy Mullett (Bonnie) and Scott Mullett (Judy) of Pittsfield. He leaves his longtime friend Bob Condron and his partner in crime John Betters, as well as his former wife, Karon Barry.


FUNERAL NOTICE:
Funeral services for Larry “Sandy” Mullett will be held Friday, May 12, at 11:00 a.m., at DERY FUNERAL HOME in PITTSFIELD with Rev. Peter A. Gregory, Pastor of St. Charles Church, officiating. Burial will follow in Ashuelot Cemetery in Dalton. Calling hours will be Thursday, from 4:00 to 7:00 p.m., at the Funeral Home.
In lieu of flowers, memorial contributions may be made payable to son, Joel Mullett, for the family to distribute to Larry’s favorite local charities.


To send flowers to the family or plant a tree in memory of Larry E. "“Sandy” " Mullett Jr., please visit our Heartfelt Sympathies Store.