In Memory of
Joseph P.
Galli
1927 - 2017
Click above to light a memorial candle.
Memorial Candle Tribute From
Dery Funeral Home
"We are honored to provide this Book of Memories to the family."
View full message >>>
Send Flowers
Menu 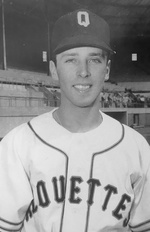 Joseph P. Galli, 89, formerly of 15 Williamsburg Terrace, passed away on Saturday, June 10, 2017 at Kimball Farms Nursing Center in Lenox where he had resided for the past year.
Born in Pittsfield on July 17, 1927 to Joseph Galli and Josephine Russo Galli, he was a lifelong Pittsfield resident. He was educated in Pittsfield schools and was a 1945 graduate of Pittsfield High School. He proudly served his country in the United States Army during the Korean War in the medical corps, and was awarded an Expert Rifleman medal. He married his wife, the late Bernadette Marie Longtin on October 15, 1949 at the former Notre Dame Church in Pittsfield. His beloved wife passed away on March 6, 2009.
Mr. Galli was employed as an insurance agent for the Prudential Life Insurance Company for twenty-five years, and later with New England Life from 1983 to 1991. He retired in 1991. Joe was a star baseball player at Pittsfield High School and at the age of 16 was signed by Paul Krichell, chief scout for the New York Yankees as a left handed pitcher. Mr. Krichell, considered by many to be the greatest scout in the history of baseball, also signed Lou Gehrig, Tony Lazzeri, Whitey Ford and Phil Rizzuto, among others. Galli’s baseball career was cut short however when Major League Baseball Commissioner Kennesaw Mountain Landis enacted a baseball law that said if a player had two eligible seasons left at the American Legion level, they could not be signed. Galli’s contract had to be rescinded by the Yankees, and he was soon drafted into the Army. He played ball while in the Army with the 7th Infantry team. Upon returning from Korea he resumed his baseball career when he signed on with the Quebec Alouettes of the Canadian-American professional baseball league and played for them in 1947 and 1948 as an outfielder and pitcher. He would at times return to Pittsfield and Wahconah Park as a member of the visiting Quebec team.
Mr. Galli was also a talented musician and songwriter. Singing came naturally to him, and his children have many dear memories of hearing his renditions of songs from the big band era as he worked around the house. He loved Frank Sinatra, and wrote many songs himself, strumming his guitar while he came up with the lyrics.
He enjoyed watching baseball and thoroughbred racing, working in his yard, reading and making people laugh with his stories and sense of humor. He also held a patent from the US Patent Office for a motor port.
He was a loving husband, a devoted father and his greatest joy was being a grandfather to his grandchildren. He leaves a son; Glen P. Galli and his wife Darlene of West Galway, NY. Two daughters; Deborah Galli Boivin of Easthampton, MA. and Kris Galli and her husband Edward Acker of Lenox, MA. He also leaves his two grandchildren; Paris Roxanne Galli Boivin and Elijah Joseph Boivin both of Easthampton as well as his former son-in-law; Lenny Boivin of Southampton, MA.


FUNERAL NOTICE: Funeral services for Joseph P. Galli who passed away June 10, 2017 will be held Friday at 11:00 AM at the DERY FUNERAL HOME in Pittsfield conducted by the Rev. Peter Gregory, pastor emeritus of St. Charles Church. Burial will follow in St. Joseph Cemetery. There are no calling hours. Memorial donations in memory of Joe may be made to St. Jude Children’s Hospital in care of the funeral home, 54 Bradford Street, Pittsfield, MA 01201. To share a memory or con

To send flowers to the family or plant a tree in memory of Joseph P. Galli, please visit our Heartfelt Sympathies Store.