To share your memory on the wall of John Ward, sign in using one of the following options:

Provide comfort for the family of John Ward with a meaningful gesture of sympathy.

Print
John Joseph Ward, 86, formerly of Pittsfield, and Lanesboro passed away on May 17, 2020 at Devonshire Estates, in Lenox, MA.

Born in Valhalla, town of Mount Pleasant, NY on August 18, 1933, to the late Charles and Mary Gibbons Ward.Read More
John Joseph Ward, 86, formerly of Pittsfield, and Lanesboro passed away on May 17, 2020 at Devonshire Estates, in Lenox, MA.

Born in Valhalla, town of Mount Pleasant, NY on August 18, 1933, to the late Charles and Mary Gibbons Ward.

He attended Pittsfield schools and went on to serve with the United States Air Force during the Korean War. He also served with the National Guard for over 20 years.

He worked for the Pittsfield School system as a senior custodian. He was an active member of the American Legion for 52 years.

He was predeceased by his first wife, Catherine Mongeau Ward who passed in September of 1967 and his second wife Phyllis Martin as well as his siblings Tiley, Raymond, Dorothy, Harold and Mary.

FUNERAL NOTICE: Funeral services will be private with burial in St. Joseph Cemetery. A celebration of his life will be held at a later date. In lieu of flowers, memorial contributions may be made in his name to the American Legion or HospiceCare in the Berkshires in care of DERY FUNERAL HOME, 54 Bradford St, Pittsfield, MA 01201.
Read Less

To send flowers to the family or plant a tree in memory of John J. Ward, please visit our Heartfelt Sympathies Store.

Receive notifications about information and event scheduling for John

There are no events scheduled. You can still show your support by sending flowers directly to the family, or planting a memorial tree in memory of John J. Ward.
Visit the Heartfelt Sympathies Store 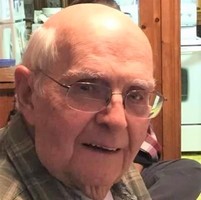