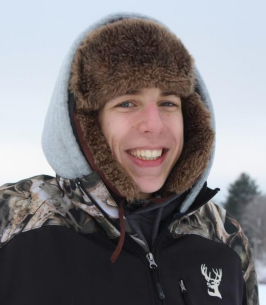 He was born in Pittsfield, MA on December 28, 1999, the youngest child of Debbie Radwich Kowalczyk and the late John J. Kowalczyk.

John Michael was a 2018 graduate of Wahconah Regional High School and a 2020 graduate of Stockbridge School of Agriculture where he majored in Landscape Design.

For the past year JM was employed as a carpenter working for his paternal uncles Rob and Dick Kowalczyk alongside his brother-in-law Austin, at Kowalczyk Development Corporation. He kept work fun; morning breaks were filled with laughter with his Gram and Pop and lunch breaks were no different.

JM loved golfing and fishing in Vermont with his Uncle Rob and his friends. One way you could describe JM is that he was the quintessential snow day. He enjoyed snowmobiling with his brother Andrew. They could stop anywhere on a trail, make a friend and have a beer. Ice fishing was something he did with his dad, John. It became one of his favorite things to do on weekends in the winter with his buddies. They would be out on the ice first thing in the morning, late into the afternoon, sitting in camping chairs, talking with friends and running for a tip-up. Skiing was something JM recently picked up to do with his friends.

JM loved his friends unconditionally. He was proud of each and every one of their accomplishments, of who they are as individuals, and even more so of the time he spent with them.

JM recently became an uncle. He was the first to get his Covid test and was there only a few hours after his nephew got home. He held him and looked at him with so much love. He ended up giving his nephew Asher many silly nicknames in his first year of life. They recently had a great vacation where they played in the sand and in the ocean together. Family was so important to John Michael. He was forever providing comic relief in any situation, even now as he looks down on his family, he is doing his best to make them laugh.

John Michael is preceded in death by his father John J. Kowalczyk and maternal grandparents Irving and Leona Radwich.

A Celebration of John Michael Kowalczyk’s life will be held, FRIDAY, July 22, 2022 at 1:30 p.m. at Wahconah Country Club in Dalton. In lieu of flowers, donations to the John Kowalczyk Memorial Fund in care of Dery-Foley Funeral Home at 890 E. Main St. Dalton, MA are welcomed.