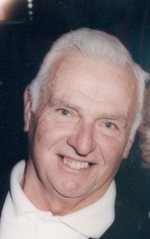 He was educated in Pittsfield schools and was a 1946 graduate of Pittsfield High School. Mr. Leahy then joined the United States Navy from 1946 to 1949. After he was honorably discharged from the Navy, he went on to graduate from Champlain College in 1953, with a Bachelors degree in Engineering.

A Civil Engineer, he worked for 37 years for the State of Massachusetts, until retiring in 1990. John married the former Lorraine F. Hanford, November 22, 1951. She predeceased him on January 15, 2015.

John was an avid golfer and member of Berkshire Hills Country Club for over 60 years. He also played golf for the US Navy. He played high school basketball and baseball and was a varsity letterman in golf and baseball at Champlain. John was a communicant of St. Agnes Church and a member of the Pittsfield American Legion.

John leaves behind his children, Michael Leahy and wife Laurie Harper of Alameda, CA; Linda Leahy of Southborough, MA; Donna Bercury of Dalton, MA; and Barbara Leahy of Alameda, CA; his sisters Ruth Lomhoff of Astoria, OR; Marjorie Johnson of San Antonio, TX. He also leaves three grandchildren, one great-granddaughter and one great-great-granddaughter.


To send flowers to the family or plant a tree in memory of John J Leahy, please visit our Heartfelt Sympathies Store.