To share your memory on the wall of John Gamberoni, sign in using one of the following options:

Provide comfort for the family of John Gamberoni with a meaningful gesture of sympathy.

John was born in Pittsfield on June 10, 1938 to Silvio Gamberoni and Pierina Broggi Gamberoni. He graduated from St. Joseph’s High School in 1956, where he was captain of the baseball team. And then from Siena College in 1961 where he also captained the baseball team while displaying exemplary glovework at the hot corner. He worked at General Electric Ordinance Department for 33 years and served in the US Army and was a member of the US Army Reserve. After his retirement he worked for the Pittsfield Gazette and Cranwell Golf Course.

He was a member of St. Joseph’s Parish, the Facciolli Club, and the Berkshire Hills Country Club where he once sunk a hole-in-one on the 7th hole.

He was an avid sports fan, especially the Red Sox, and he holds the world record for number of times turning off the TV in disgust after a Red Sox loss vowing to “never watch them again”, only to be tuned in for the first pitch the following evening.

John loved to coach youth baseball in the Pittsfield Little League and Babe Ruth League. He was at the helm of the famous “Jimmy’s Restaurant” Little League team during their heyday and was once ejected for arguing balls and strikes.

He loved reading, listening to classic jazz standards, and talking politics. And he may be the only person who can claim he supported both John Kennedy and Donald Trump. He was a terrific cook, terrible with computers, and had little patience for anyone without a sense of humor.

Above all else his greatest joy was his family. Sitting around a table with his family, a big meal and a bottle of wine was his idea of heaven on earth. He is survived by his wife of 56 years Carol Gamberoni, and his sons John (Cathy) of Richmond, Joseph (Renee) of Nantucket, Anthony (Patrice) of Dalton and Michael Shannon) of Pittsfield. He has twelve grandchildren; J.T., Nicole, Victoria, Victor, Siena, Maria, Marley, Ava, Antonia, Olivia, Luke and Tessa. He also leaves his sister-in-law Sara Donahue and her husband William, and sister-in-law Carol Varanka of CT. He was predeceased by his beloved sister Sylvia Marie Gamberoni, O.S.F. of Fayetteville, NY.

FUNERAL NOTICE: Funeral services for Mr. Gamberoni will be held, THURSDAY, March 14, 2019 at 8:45am from Dery Funeral Home, with a Liturgy of Christian Burial at 9:30am at St. Joseph Church, celebrated by Msgr. Michael Shershanovich, Pastor. Calling hours will be held, WEDNESDAY, March 13, 2019 from 4:00pm to 7:00pm at DERY FUNERAL HOME. Memorial donations can be made in his name to Dana Farber Cancer Institute, in care of the funeral home, 54 Bradford Street, Pittsfield, MA 01201

The family would also like to extend a special thanks to Hospice Care in The Berkshires, especially Jamie, for the wonderful care they provided these last few weeks.

To send flowers to the family or plant a tree in memory of John J Gamberoni, please visit our Heartfelt Sympathies Store.

Receive notifications about information and event scheduling for John

Posted Mar 13, 2019 at 12:20pm
I will always remember John's broad smile, his wonderful sense of humor and his many kindnesses.
It feels great to have known him. 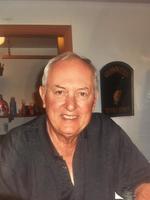