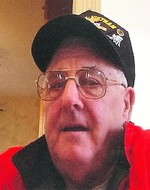 Jack V. Groat, 86, of Peru, passed away Thursday June 1, 2017 at Berkshire Medical Center surrounded by his loving family. Born in Pittsfield on October 15, 1930 the son of the late Willis H. Groat and the former Madelyn A. Nardin. He attended local schools.
Jack enlisted in the Unites States Navy with the Seabee’s and proudly served his country during both the Vietnam and Korean War. Jack was a member of the American Legion and VFW.
Jack enjoyed woodworking and tending to his yard. However, his greatest joy was spending time with his family.
He is survived by his wife of 66 years; the former Julia L. Loynes, his sons; Stephen E. Groat of New York and David T. Groat of Boston, his daughter; Doreen E. Groat of Pittsfield, his sister; Joan M. Gates of Pittsfield, and many beloved nieces and newphews.
He was predeceased by his son; Glenn H. Groat who died in 1976, his brothers; Willis H. Groat, James E. Groat and Clifford H. Groat and his sister; Inez Sciola.


Funeral Services – Funeral Services for Jack V. Groat who died June 1, 207 will be held Wednesday June 8, 2017 at 10 a.m. at DERY FUNERAL HOME, 54 BRADFORD ST., PITTSFIELD. Burial will follow in the family plot in Pittsfield Cemetery. Calling hours will be Tuesday from 4 to 7 PM at the funeral home. In lieu of flowers memorial donations in Jack’s memory can be made to the American Diabetes Association or the Leukemia Association of America. To share a memory or condolence with Jack’s family please visit www.deryfuneralhome.com


To send flowers to the family or plant a tree in memory of Jack V. Groat, please visit our Heartfelt Sympathies Store.