To share your memory on the wall of Henry Goodell, sign in using one of the following options:

Provide comfort for the family of Henry Goodell with a meaningful gesture of sympathy.

Henry Goodell is survived by his two daughters: Lori A. Goodell of Pittsfield, and Lisa M. (and Robert) Gasteyer of Wilbraham, MA; two sisters: Marjorie E. Marusarz of Pittsfield, and Joan Lackey of Niantic, CT; three grandchildren: Ella Stodden, Ryan Gasteyer, and Kara Gasteyer; his former wife: Elizabeth Mancari Goodell; many nieces and nephews including Gary Marusarz who he was very close to.

FUNERAL NOTICE: Funeral services will be private and at the convenience of the family. In lieu of flowers, donations may be made to Berkshire County Kids Place or Elder Services Meals on Wheels Program, in care of DERY FUNERAL HOME, 54 Bradford Street, Pittsfield, MA 01201.
Read Less

To send flowers to the family or plant a tree in memory of Henry A Goodell, please visit our Heartfelt Sympathies Store.

Receive notifications about information and event scheduling for Henry

There are no events scheduled. You can still show your support by sending flowers directly to the family, or planting a memorial tree in memory of Henry A Goodell.
Visit the Heartfelt Sympathies Store

We encourage you to share your most beloved memories of Henry here, so that the family and other loved ones can always see it. You can upload cherished photographs, or share your favorite stories, and can even comment on those shared by others. 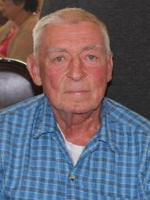