In Memory of
Gerard V "Vince"
Conway
1932 - 2018
Click above to light a memorial candle.
Memorial Candle Tribute From
Dery Funeral Home
"We are honored to provide this Book of Memories to the family."
View full message >>>
Send Flowers
Menu 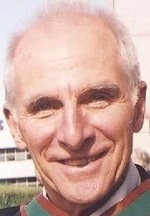 Pittsfield - Gerard V. Conway (Vince), aged 85, passed away peacefully with family by his side at Berkshire Medical Center on January 27, 2018 after a brief illness.

He was born in London, England on May 15th, 1932, to Gerard Anthony Conway and Margaret Ryan Conway. Not long after the outbreak of WWII, Vince and his sister Mary were sent back to live with their "Granny" on the family farm in County Meath, Ireland. There, at "The Glebe", young Vincent worked the land, tended to the animals and hunted with his dog Ranger. He completed secondary school at Rockwell College in Tipperary and then attended University College Dublin where he graduated with an engineering degree in 1954. He was a passionate player and fan of both hurling and Gaelic football.

Initially employed as a field engineer in Ireland, Vince emigrated to the United States in 1957 had a long and happy 30 years with General Electric designing transformers and patenting new technologies. He raised three children and was an accomplished skier, bike racer, golfer, runner, hiker, gardener, and all-around do-it-yourselfer. His passion for fitness led him to mentor many young skiers and cyclists, and he offered thoughtful instruction to anyone willing to learn. He had a deep love for animals and the outdoors and he would pass down his keen observations and skills to anyone who was curious about the natural world. Vince coached the Mt. Greylock Ski Team, co-chaired the Fresh Air Fund, and was an usher at Tanglewood for many years. He also organized local cycling races and volunteered countless hours clearing local hiking trails.

After retirement, Vince could be found skiing on the slopes of Jiminy Peak or through the meadows at Hickory Hill, windsurfing on Onota Lake or biking and hiking the hills of Berkshire County. Above all else, he was a devoted father and grandfather. "Pop" loved all of his children and grandchildren unconditionally and proudly supported and encouraged them through all the challenges of life. In 2002, he relocated to Vail, Colorado to help raise two of his granddaughters. For many years, he happily assisted his son Dan, both at Dan's job hosting World Cup ski races, as well as on the home front. Vince returned to the Berkshires in 2013 and last resided at Kimball Farms in Lenox.

Vince is survived by his daughters: Debra Havlick of Port Charlotte, Florida (and her husband Robert) and Lori Murphy of Dalton; by his grandchildren Jenny Heer and Sara Havlick; Matt, Dan and Katie Murphy (and her partner Chris Bianchi); and Keely and Danielle Conway; by his eight great grandchildren: Alex, Matthew, Brendan, David, Macy, Lincoln, Charlie, and the apple of his eye, Cole; by his former son-in-law David Murphy of Pittsfield; by his brother-in-law Kevin Rispin of Enfield, County Meath, Ireland; by his niece Elaine Rispin and nephews Gerard Rispin and Kevin Rispin; by his large extended family in Ireland; and by his cat Gigi. He was predeceased by his beloved son Dan, his sister Mary Rispin, and his niece Paula Rispin.

In keeping with Vince's wishes, there will be no calling hours and no funeral. Please take a hike, go for a ski, volunteer at the Humane Society, or mentor a young person in his memory. Donations may be made to the Special Olympics in care of the Dery Funeral Home. A memorial family trip to Ireland will be made at a future date.

To send flowers to the family or plant a tree in memory of Gerard V "Vince" Conway, please visit our Heartfelt Sympathies Store.