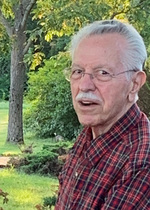 The son of Jerry and Anna Mae (Jenne) Rufo, he was born in Pittsfield on June 14, 1935. He attended Pittsfield public schools where he excelled in the classroom and as a star of the PHS football team.

After graduating, George married his high school sweetheart, Dorothy Liebenow setting an early foundation for a loving partnership in family as well as business. He and Dot established and ran their own mold making shop, Lakewood Mold Company which later became Rufo Industries. The firm was well known in the field as a builder of precision tools used in the plastics industry. For the next 25 years, the business expanded into a large-scale manufacturer of plastic products, primarily for the music and entertainment industries with the creation of other companies including Poly-Matrix, Syntronics, and Poly CD. A proud son of Pittsfield, he employed hundreds of locals for more than four decades.

Even as the business grew, George remained grounded. Loyal to the core, he was an employer who not only rewarded hard work, but who often lent a helping hand to workers who faced adversity. He was a natural born leader whose admirable work ethic was exhibited in all aspects of his life. He instilled a sense of accomplishment for a job well done to all those around him. From family to coworkers - farm to factory, his infectious enthusiasm could transform even the most ardent naysayers into team players.

His generosity knew no bounds - he often eschewed public recognition of donations in favor of giving anonymously to favored charitable institutions. More often, he gave to individuals for whom he offered life altering assistance in times of need. His kind hearted legacy lives on through the many lives he touched through his many heartfelt gestures.

Unlike many in his position, George found reward in living a simple life. An avid outdoorsman from an early age, he set out from west Pittsfield and shot his first deer on a spectacular piece of land in Richmond whose contours and views left an indelible impression. Years later, with the success of his business, he was able to acquire that very land and build a house for his family where he lived out the rest of his days.

He possessed a natural intellectual curiosity of the world around him with a keen appreciation for how things work, whether it be complex mold-making machinery or how a bird builds a nest. At Deer Hill Farm, he enthusiastically pursued his many agrarian interests – pruning his orchard, starting plants in his greenhouse for his extensive gardens, cutting and bailing hay for his growing herd of polled Herefords, while tending a revolving door of other livestock.

A consummate sportsman, his binoculars were never far from his side as he diligently recorded wildlife sightings. He indulged this interest from his property and beyond with many fondly remembered trips out west with family and friends.

Though his life was filled with business pursuits and personal interests, family always took center stage. Whether leading a project, or manning the grill at a picnic, George relished the moments when he could be surrounded by his extended clan. But most of all, George cherished time with Dot. Through thick and thin, their loving commitment was unwavering with countless examples, though none more telling than his devoted care in Dot’s last years.


His life lived fully and well, he will be missed by all who knew him but especially his family. George was predeceased in February 2019 by his loving wife of 67 years, Dorothy Rufo. He leaves behind his children: George Rufo, Jr. and his wife Cecelia of Dalton, Michael Rufo of Pittsfield, David Rufo and his fiancee Sheila Blomquist of Old Lyme CT, Steven Rufo and his partner Daniel Dempsey of Richmond, and his daughter Deborah; three grandchildren: George Rufo III of Richmond, Jessica Rufo of Lanesborough, and Cynthia Rufo of Boston; his brother, William A. Rufo and his wife, Judith, of Pittsfield and three great-grandchildren and many nieces and nephews. In addition, George was predeceased by his brother Gerald, and his son-in law, Michael Buratto.

Due to COVID considerations, mass and burial were private.

In lieu of flowers, donations may be made to The Friends of the Richmond Public Library in care of Dery Funeral Home, 54 Bradford St, Pittsfield MA 01201.