To share your memory on the wall of Gary VanBramer, sign in using one of the following options:

Born in Pittsfield on June 22, 1947, the son of Pauline Ann Barresi VanBramer Connor and John Connor, Gary was educated in Pittsfield schools and was a 1965 graduate of Pittsfield High School.

A Vietnam War veteran, Gary enlisted with United States Navy on July 21, 1965, served more than two years overseas, stationed at the U.S. Naval Air Facility in Sigonella, Catania, Sicily. He was honorably discharged on June 21, 1969, and transferred to Naval Reserve where he served until July 21, 1971.

Following military duty, Mr. VanBramer went to work for Becton-Dickinson in North Canaan, Conn., from where he retired as Plant Supervisor.

Gary’s love for music and cars was undeniable.

He was pre-deceased by a sister, Judith Harris, and a brother, Kenneth VanBramer; and his son-in-law, Robert J. Hover, Jr.


FUNERAL NOTICE: Funeral services for Gary P. VanBramer will be held Friday, October 9, at 10:00 a.m. at DERY FUNERAL HOME in PITTSFIELD with Rev. Ralph W. Howe, Pastor of First United Methodist Church, officiating. Burial with military honors will follow in St. Joseph’s Cemetery. Calling hours will be Thursday, from 4:00 to 7:00 p.m., at the Funeral Home. In lieu flowers, memorial contributions may be made to Veterans Community Care Center (Pittsfield) or to the Veterans Administration Medical Center (Northampton) both in care of the Funeral Home, 54 Bradford Street, Pittsfield.
Read Less

To send flowers to the family or plant a tree in memory of Gary Paul VanBramer, please visit our Heartfelt Sympathies Store.

Receive notifications about information and event scheduling for Gary

We encourage you to share your most beloved memories of Gary here, so that the family and other loved ones can always see it. You can upload cherished photographs, or share your favorite stories, and can even comment on those shared by others. 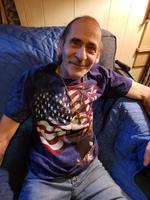