In Memory of
Frank W.
Thoubboron
1922 - 2017
Click above to light a memorial candle.
Memorial Candle Tribute From
Dery Funeral Home
"We are honored to provide this Book of Memories to the family."
View full message >>>
Send Flowers
Menu 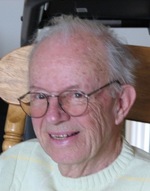 Frank W. Thoubboron, age 94, passed away on April 17. He resided on Ann Drive in Pittsfield.
Born May 23, 1922, in Boston, son of Frank and Laura (Jacobia) Thoubboron, he was a 1939 graduate of Pittsfield High School and then attended Berkshire Business College.
Frank was hired by General Electric as a file clerk in 1941, and subsequently transferred to the Cost Accounting Section. He enlisted in the U.S. Army Air Force in October 1942, serving in California, Hawaii, Palau and Okinawa. He was a sergeant and was discharged in January 1946.
Resuming work at GE after the war, Frank enrolled in the GE Business Training Program and attained supervisory positions in Finance. At the time of his retirement in January 1986, he was Manager of Government Accounting, GE Ordnance Systems.
Since his retirement he had been an active volunteer for RSVP as a van driver, Kid’s Read at Conte School, at the Visitor’s Center, and on the RSVP Advisory Board. He was also a driver for the Red Cross and a Tanglewood gate attendant.
As a member of the former Notre Dame Church, Frank was an altar server for funerals, a lector, a Eucharistic minister and a member of the Parish Council. He was a member of Wahconah Country Club for many years, a member of the GE’s Elfun Society and Quarter Century Club. Frank was a strong advocate for many charitable causes including St. Joseph’s High School, the Christian Foundation for Children and Adults, the Brady Center for Gun Control, Amnesty International, Habitat for Humanity, Special Olympics and the Snapdragon Book Foundation.
In 1976 Frank married Annette Tremblay. They travelled extensively after retirement to all fifty states, throughout Europe, plus China, Australia and New Zealand. They especially enjoyed their bike trips through France and the Netherlands. He enjoyed bicycling and cross-country skiing in the Berkshires and Vermont. He was a faithful supporter of the Boston Red Sox, like his father, and an ardent reader and crossword puzzle enthusiast.
Frank leaves his devoted wife Annette, and seven loving children from a previous marriage, Mary and husband Jerry Ginley of Venice, Florida, Eileen and husband James Shugart of Port Charlotte, Florida, Anne and husband Clark Knickerbocker of Houston, Texas, Paula and husband Thomas Beck of Chester, Massachusetts, John Thoubboron of Richmond, Vermont, Kim and husband Jay Bortolussi of Andover, Massachusetts, and Karen and husband Donald Ross of Pittsfield. A daughter, Jane Christine, died in January 1959, shortly after birth. He also leaves thirteen grandchildren and ten great grandchildren.

FUNJERAL NOTICE: Visiting Hours will be held at DERY FUNERAL HOME, 54 Bradford Street, Pittsfield on Friday, April 21, 2017 from 4pm to 7pm. A Liturgy of Christian Burial will be celebrated at 9am Saturday April 22, 2017 at Sacred Heart Church on Elm Street in Pittsfield. In lieu of flowers donations may be made to the Snapdragon Book Foundation, c/o Dery Funeral Home.

To send flowers to the family or plant a tree in memory of Frank W. Thoubboron, please visit our Heartfelt Sympathies Store.