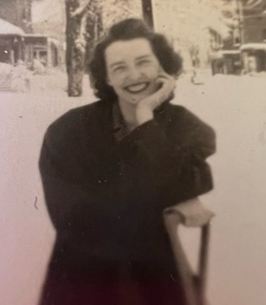 Ethel M. Speranzo Conti passed away on July 6, 2022 after a convalescence at Craneville Nursing Home of Dalton. She was born February 26, 1924 and raised in Pittsfield MA, where she spent most of her life. She was the daughter of Eva B. Potter and went to public schools in Pittsfield, graduating from Pittsfield High School in 1942.

Ethel was married to Nicholas J. Speranzo for fifty-five years. Ethel was employed at Rice’s Silk Mill until her forties when she began her career at General Electric; she retired from General Electric at age 62 and became very involved with the Senior Center, both in Pittsfield and in Greenfield. Ethel loved cooking and she was a skilled seamstress. She made many quilts and often entered them in shows at BCC. She also enjoyed knitting and many other crafts.

After her husband, Nicholas J. Speranzo, died in late 2001, she met and married Andrew Conti from Greenfield in 2002. They enjoyed a cruise to Alaska and trip to Italy and attended many antique car shows together.

Ethel enjoyed life and was very active. She always prided herself on her appearance and the fact that she never looked her age. Ethel was well known for her optimistic attitude toward life and those around her. She also did a lot of volunteer work.

At Ethel’s request, there will be no calling hours; there will be a celebration of her life at a later date. If you would like to honor her memory, volunteer at the Senior Center or make a donation to Alzheimer’s Association in memory of her daughter-in-law, Patricia. The family would like to especially thank the nurses and staff of Craneville for the care and concern they demonstrated during Ethel's convalescence. Dery Funeral Home has been entrusted with her arrangements.