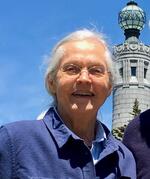 Emilie S. Piper passed away on Monday, February 15, after a period of declining health. A longtime resident of Pittsfield, MA, she spent her last months in comfort at the home of her son and daughter-in-law Geoff and Leslie Piper in Rochester, MA. Her passing, in the company of her children, was peaceful. She was 90 years old.

The daughter of Ralph and Edna Starke, Emilie was born on June 28, 1930, in East Orange, NJ. The family later moved to Pittsfield, MA, where her father was a Sr. Vice President for Berkshire Life Ins. Co. She was an active participant in school activities and sports at Miss Hall’s School, and an excellent swimmer, skater, and sailor. She was honored to be elected the Pittsfield Winter Carnival Queen.

She earned her B.A. at Connecticut College, where she sang in the college choir for all four years. After graduating, she made a train and bicycle tour of Eu-rope with classmates. She completed her M.A. at Cornell the following year. Because she liked a challenge (and without making a big deal about it, the bragging rights), she swam across the twin Lakes in Salisbury, CT.

In 1953, she married Winthrop W. Piper, a college professor, and their first son Winthrop was born in 1954. They lived in Waterville, ME. and then Burlington, VT, where two more sons, Geoffrey and Andrew, were born before the family moved to Pittsfield. Their only daughter, Emilie, was born there.

Starting in 1962, Emilie was the Music and Art Librarian at the Berkshire Athenaeum in Pittsfield, MA. As grade-schoolers, her children were proud that their Mom worked in the grand, circa-1876 stone building, right across the street from City Hall, and was one of the guardians of all it held.

The family lived then across the street from the neighborhood school. Emilie was unfazed by the regular presence of many neighborhood children climbing to the treehouse, attempting various feats of daring, and being, as free-range, early-1960’s children generally were, a bit of a nuisance. On rainy days, when her own were underfoot, she swept them unceremoniously outdoors, saying, “You aren’t made out of brown sugar, you won’t melt”.

When her marriage ended in 1967, she became the Librarian at Mt. Everett Regional School in Sheffield, MA, and in 1968, she married Richard Rutledge. In 1972, she completed her M.L.S., commuting from Sheffield to Albany to at-tend evening class, and in 1973 was elected to the International Library Science Honor Society. The marriage to Mr. Rutledge ended in 1975.

In 1977, Emilie joined a like-minded group to spend a week hiking in the Warner Wilderness in the Modoc National Forest in California. Later, she fulfilled a long-time dream by paddling the length of the Allagash Wilderness waterway on a canoe-camping trip. A trip with her children to the infamous “knife-edge” on Mt. Katadhin made for a tale told wide-eyed.

During her time in southern Berkshire County, she devoted many weekends to exploring the field and forest landscape in search of stone walls, abandoned roads, cellar holes, and orchards, and became an astute reader of the signs left behind hundreds of years earlier. This was history “en plein air”, and on foot, the outdoor counterpart to the research she was involved in as Curator of the Sheffield Historical Society.

As ongoing sets of grandchildren came into the picture she found time to help their busy parents, forging important links in the family’s generational chain.

Her interest in local history and her facility with historical sources and documents led to numerous publications, including "Americans of African Descent: An Annotated Bibliography of Berkshire County, Massachusetts,” published in 2006, and an account of the family of Agrippa Hull, an African-American patriot, born free in Northampton, MA, who served in the Revolutionary War and became the largest black landowner in Stockbridge, MA.

She co-authored two books with anthropologist David Levinson, of Yale University’s Human Relations Area Files. “On the Other Side of Glory,” published in 2010, tells the story of African American men from Berkshire County and northwestern Connecticut who served in 54th Volunteer Infantry, the all Black “Glory” regiment, during the Civil War.

“One Minute a Free Woman” tells the story of Elizabeth “Mumbet” Freeman of Sheffield, MA. Her lawsuit petitioning for her freedom led to the 1781 Massachusetts Supreme Court ruling in her favor that was the de facto end of slavery in the state. To create this account, Ms. Piper dug deep into local sources and records, eventually locating, among other things, Ms. Freeman’s handwritten last will and testament. Emilie served on the Founding Advisory Council of the Upper Housatonic Valley African American Heritage Trail. Her own family was included in Emilie’s research efforts: she traced their ancestry on both sides back to their arrivals from Europe in colonial times.

Emilie’s long life was distinguished both by her determination to live life on her own terms, and by her many sacrifices for those she loved. Her moral compass pointed unerringly to fairness and justice. She passed on a rich appreciation for the natural world and a clear-eyed understanding of our part in it, as well as finding self-expression there. Included in those lessons was the knowledge that humans were made to be pretty sturdy, and that discomfort or even some hardship was part of living a full life. She was decades ahead of her time in teaching her sons that, when their turn came, contributing to family life would require more than bringing home a paycheck.

Wherever she lived she planted a beautiful garden and kept it well-tended, right up to her last year, and always kept a home-grown bouquet on her kitchen table. She spent many happy seasons in her garden, enjoying both her work and the natural beauty of her surroundings, and passed her appreciation on to her children.

True to her profession, she instilled in her children an abiding respect for reading, learning, and always striving to better understand the world and the people in it. She encouraged proficiency in every task and being engaged in both heart and mind. Ponies, dogs, horses, cats, and even a fostered raccoon cub helped with the “heart” part, and there was no such thing as too much knowledge.

While she never sought to be the center of attention, she reveled in being recognized for her many accomplishments. Though her research was often a solitary endeavor, her disposition was bright and funny she and loved good company and conversation. She will be sorely missed. In the words of a minister friend, “The world is never quite the same without your mother in it.”

A celebration of her life will take place at a summer date, to be announced. In lieu of flowers, memorial contributions may be made in her name to either the Local History department of the Berkshire Athenaeum in Pittsfield; or MA Audubon’s Pleasant Valley Wildlife Sanctuary in Lenox, in care of Dery Funeral Home, 54 Bradford St, Pittsfield, MA 01201.