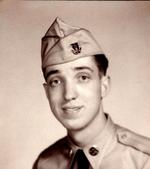 Donald L. (Don) Lutes died September 3, 2018 at Fairview Rehabilitation Center in Great Barrington where he had resided since May.

A lifelong resident of Pittsfield, Don was born March 1, 1931, the son of Donald L. Lutes, Sr. and Pauline (Peck) Lutes. He graduated from Pittsfield High School in 1948 and from Babson College in 1951 with a degree in business administration. He then entered the United States Army, where he served as a Cryptographic Specialist with the U.S. Military Advisory Group to the Republic of Korea from 1952-1954.

Upon his return from the Army, Lutes went into business with his father in a manufacturing business they started in the garage of their Pittsfield home. Known as Lutes & Son, they made and marketed religious art products, including memorial statuary with internal lighting. Success moved the business from his backyard into a factory on Fourth Street, where it flourished until the late 1970s.
First in his spare time, and later in retirement, Don pursued two avid interests, contributing significantly to each.

As one of the earliest members of the Berkshire Coin Club, his membership traces back to 1957, the year after the club was founded. For more than 60 years Don was the life of the Club serving as President, Treasurer, Club Librarian, Historian and finally as the Newsletter Editor. In 1974 the membership voted to grant Don the first “Life Membership” of the club, an honor bestowed in order to recognize his many years of service and dedication to coin collectors of Berkshire County. During the 1980’s, when many coin clubs were disbanding, Don’s perseverance kept the local organization alive and moving forward. Today, the Berkshire Coin Club is 62 years old and going strong due to his efforts.

Don was an avid collector of both US and foreign coins and took great joy in his hobby. The star of his collection was the “discovery” of the 1943 bronze cent, the first of only 12 known. This coin brought Don great joy and notoriety. He loved to share the story of how he obtained the coin in the lunch line at Pittsfield High School in 1947. Due to his declining health, Don made the difficult decision to part ways with his collection. He lived long enough to see the documentation that his beloved 1943 cent had been encapsulated by a major grading company, validation the coin was genuine and listing it as the “Don Lutes Discovery Coin”, this will ensure that Don’s name will live forever in Numismatic history.

Don’s second avocation began when his grandmother died and left him a “box of stuff” about her family, leading to an unexpected new interest, the field of genealogy, which would stay with him for the rest of his life. He became a member of the Berkshire Genealogical Society in 1975 and was later elected president of its successor organization, the Berkshire Family History Association (BFHA), in 1985, an office he was destined to hold for the next 32 years. In that capacity Don worked tirelessly to advance the work of creating access to historical materials in both printed and manuscript form. With the help of other members of the BFHA, he developed a method of indexing books and manuscript records held in the collections of the Berkshire Athenaeum. Using that method he created a massive database of more than 6 million entries, which continues to be used daily by both local and visiting researchers to the Athenaeum. Don also served as editor of the BFHA quarterly publication The Berkshire Genealogist, and filled any other position that needed filling in order to keep the organization moving forward.

As a result of these efforts in the field of genealogy, Don received numerous awards including the National Genealogical Society Award of Merit in 1998 and the Rotary Club of Pittsfield’s Kagan Award in 2010. In 2007 The Berkshire Athenaeum officially renamed its annual volunteer award giving it the title The Donald L. Lutes Volunteer of the Year Award to reflect the incomparable service that Don’s ongoing efforts provided to the library and to the community.

Don leaves several first cousins and many devoted friends. In addition to his parents, he was predeceased in 1995 by his wife Isabel (Walsh) Parker, whom he married in 1986.


At Don’s request, a private burial service was held at the family plot in the Pittsfield Cemetery on September 10th. Memorial donations in Don’s name may be made to the Berkshire Athenaeum or to the Berkshire Family History Association, care of Dery Funeral Home, 54 Bradford Street, Pittsfield, MA 01201.

To send flowers to the family or plant a tree in memory of Donald L "Don" Lutes, please visit our Heartfelt Sympathies Store.