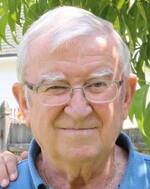 Clement D. LeClaire, 87, of Cheshire, MA, passed away December 30, 2020 at Berkshire Medical Center due to complications with pneumonia.
He was born in Adams, MA on January 4, 1933 to the late Lucien and Yvonne Ouellette LeClaire. He attended Notre Dame school in Adams.
Clement married his high school sweetheart Carol Ann Chaput on June 26, 1954. She predeceased him in 2007.
He was a United States Navy Veteran, having served as an EM3 Electrician's Mate during the Korean War.
Mr. LeClaire was employed as a mainframe computer operator at Sprague Electric, and later at GE Ordnance in Pittsfield from 1959 until retirement in 1988.
He was a communicant of St. Mary’s of the Assumption Church in Cheshire. He was a member of the Berkshire County Pistol League for 47 years where he shot for the Adams team. He was also a member of the GE Pensioner’s Club, GE Quarter Century Club, the Cheshire Lions Club, and Trout Unlimited. He enjoyed the outdoors, fishing, hunting, and mushrooming.
He is survived by his children, Lisa M. Meczywor and husband Michael of Adams, Donald O. LeClaire and wife Susan Slattery of Hinsdale, Dennis M. LeClaire and wife, Susan Bouchard of Florida, MA; as well as his sister, Patricia Bondini of Cheshire; three grandchildren, Michelle, Nicole and Christopher O’Boyle and a great-granddaughter, Lilianna.
He was predeceased by his brother, Ernest LeClaire.
FUNERAL NOTICE: There are no calling hours. There will be a church service at a later date. In lieu of flowers memorial contributions may be made in his name to either the Cheshire Fire Department or St. Mary of Assumption Church in Cheshire in care of Dery Funeral Home, PO Box 445, Cheshire, MA.