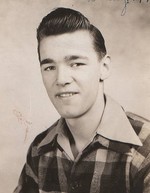 Charles H. Willey (Bob to family and friends) (91) died at home August 11th after a short battle with cancer.
Bob was born in Middlefield, MA on February 3, 1929 to Edith (Pease) and Charles F. Willey. He grew up in Middlefield and Chester and graduated from the former Chester High School in 1950, where he met his wife, Margie (Meiers) in 1946. They were married in 1951 and lived in Becket for 35 years.
After serving in the US Army and being honorably discharged (1950-1952), he held various jobs at the Chester Cemetery, Becket Quarry, Bancroft Paper Mill and Cortland Grinding Wheel Co., before starting work at GE Transformer Division, where he worked for 20+ years, retiring in 1987.
Bob was a devoted husband to Margie who had MS and cared for her for 44 years before her death in 1995. During his younger years, Bob was a member of the Becket Volunteer Fire Department and coached Little League. He played baseball for the Becket American Legion Post and softball with various teams and was a member of the GE Pension and Quarter Century Club.
Bob’s love of music, especially country music, led him to teach himself to play the guitar and not a family event took place without a sing-along. He enjoyed watching baseball and was a fan of the Boston Red Sox and New England Patriots. Bob loved the outdoors and while able, spent time hunting and fishing. Bob also loved gardening and animals.
In 1997, Bob married his current wife, Shirley and enjoyed raising and selling chihuahua’s for several years. Due to his love for them, many never got sold, but made their home with them in Washington, MA.
Besides his wife, Shirley, Bob leaves a son, David Willey (Nancy) and daughter, Merri Seidl (James) as well as stepchildren, Violet D’Antonio (Dave), Cindy Richmond (John), Russell and Donald Richmond; four grandchildren, Justine, Arin, Nathan, and Alison; step-grandchildren, Samantha and Robert and great-grandchildren, Caleb, Quinn, Violet, Sawyer, Victoria, Theo, Savannah and Cole.
He also leaves brothers, Edward Willey (Claire) of Westfield and Bruce Willey (Wendie) of Easthampton. Besides his parents and his first wife, Marjorie, he was predeceased by his sister, Barbara Sakaske and step-son, Darrell Richmond.
Due to Covid-19 restrictions, there will be no services at this time. The family will hold a memorial service at a later date.
In lieu of flowers, donations may be made to HospiceCare in The Berkshires or the Eleanor Sonsini Animal Shelter in care of DERY-FOLEY FUNERAL HOME, 890 E. Main St., Dalton, MA 01226.
The family would like to thank the nurses and aides from Hospice for their care.