In Memory of
Anthony F. "Toe"
Procopio
1924 - 2017
Click above to light a memorial candle.
Memorial Candle Tribute From
Dery Funeral Home
"We are honored to provide this Book of Memories to the family."
View full message >>>
Send Flowers
Menu 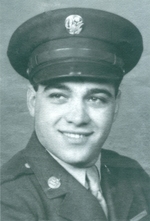 Anthony F. “Toe” Procopio, 93, of 95 Elaine Drive passed away on Thursday at Berkshire Medical Center. Born in Pittsfield on March 3, 1924, he was a son of the late Dominick and Mary Correale Procopio. A lifelong resident of Pittsfield, he was educated in Pittsfield schools and was a 1942 graduate of Pittsfield High School. He went on to proudly serve his country during World War II in the United States Army where he served in the Pacific. He was the recipient of the Good Conduct Medal. He was the longtime owner and operator along with his brothers of Procopio Brothers Garage for thirty nine years. From 1967 to 1968 he worked as a maintenance foreman at General Electric and from 1978 to 1982 was a foreman at Kimberly Clark. From 1984 to 1990 he worked as a sales associate at Siegel Furniture. Mr. Procopio was a communicant of Sacred Heart Church, a member of the American Legion Post 68, the Disabled American Veterans and the Berkshire County Deputy Sheriffs Association. A longtime Yankee fan, he enjoyed bowling, football and basketball. A three sport athlete at Pittsfield High School in baseball, basketball and football, he was the captain of the football team and he was also a member of the Post 68 baseball team which was crowned the Eastern Seaboard Champion. Mr. Procopio was also inducted into the Berkshire County Football Hall of Fame. He leaves his wife, Helena Northwood Procopio of Pittsfield whom he married on October 4, 1947 at St. Agnes Church in Dalton. They would have celebrated their 70th wedding anniversary this coming October. He leaves two daughters; Linda F. Messana and her husband James of Lenox and Betsy L. Burgin and her husband Chris of Pittsfield. A brother; Frank J. Procopio of Pittsfield and three sisters; Mary Smith of Foxboro, MA, Jane Fowler of Tomball, TX and Jan Clark of Pittsfield. She also leaves four grandchildren; Wendy Greiner, Robert Hart Jr., Timothy Hart and Michelle Messana. Seven great grandchildren and four great great grandchildren as well as several nieces and nephews. He was predeceased by two sisters; the late Yolanda Potter and Angelina Barzowskas and by three brothers, Salvatore, Alfonso and Joseph Procopio.

FUNERAL NOTICE: Funeral services for Anthony F. “Toe” Procopio, 93, of Pittsfield who passed away April 27, 2017 will be held Monday at 10:15 AM from the DERY FUNERAL HOME in Pittsfield followed by a Liturgy of Christian Burial at 11:00 AM at Sacred Heart Church. Burial with military honors will follow in St. Joseph Cemetery. Calling hours will be held Sunday from 4 to 7 PM at the funeral home. Memorial donations in memory of Tony may be made to Soldier On in care of the funeral home, 54 Bradford St. Pittsfield, MA 01201.


To send flowers to the family or plant a tree in memory of Anthony F. "Toe" Procopio, please visit our Heartfelt Sympathies Store.