In Memory of
Anthony G "Tony"
Cancilla Jr.
1935 - 2018
Click above to light a memorial candle.
Memorial Candle Tribute From
Dery Funeral Home
"We are honored to provide this Book of Memories to the family."
View full message >>>
Send Flowers
Menu 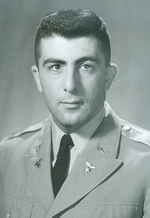 Anthony G. Cancilla, Jr., of Pittsfield, passed away on February 18, 2018, at the age of 82. A gentle soul, he will be missed by the friends he made during his final stay at Kimball Farms Nursing Facility in Lenox.

Anthony, better known as Tony by friends and family, was born in Pittsfield on June 28,1935 to the late Anthony G. Cancilla, Sr. and Angela Froio Cancilla. He graduated from Pittsfield High School in 1953, and graduated from Syracuse University in 1957. He married Claudette L. Molleur on August 9, 1958, and moved to San Antonio, Texas that same day. They would have celebrated their 60th wedding anniversary this August.

He had a full and colorful career that took him across the country: He was a proud Retired Colonel who served 33 years in the Army Reserves; he was a recruiting officer for the United States Military Academy. He worked at Jones and Lauplin Steel Mill in Pennsylvania, General Electric in Pittsfield, and then for many years as a Quality Control Manager for Digital Equipment Corporation.

While living in Pittsburgh in the 1960s, he became a Steelers fan; moving back to Massachusetts did not dissuade him from his team, and he immensely enjoyed football and his fantasy league. His other hobbies included golfing, reading, yard work, being a Eucharistic Minister at the former Mt. Carmel Church, playing cards with his poker group, and spending time with his family.

He will be missed dearly by his wife, Claudette, younger brother William Cancilla and wife Betty; his son, Michael Cancilla and wife Barbara of Springville, AL; his daughters, Toni Massery and husband John, and Ann Cancilla-Cole; his grandchildren Sara Massery, Perry Cancilla, and Eva Cole, as well as many nieces, nephews, grand-nieces, and grand-nephews.


FUNERAL NOTICE: Funeral Services for Mr. Anthony G. Cancilla, Jr. will be held Saturday February 24, 2018 at 12:00pm at DERY FUNERAL HOME in Pittsfield. Calling hours will be held prior to the service from 11:00am-12:00pm. In lieu of flowers, donations may be made to Hospice Care in the Berkshires in care of the funeral home. To leave a memory or condolence with the family, please visit www.deryfuneralhome.com


To send flowers to the family or plant a tree in memory of Anthony G "Tony" Cancilla Jr., please visit our Heartfelt Sympathies Store.