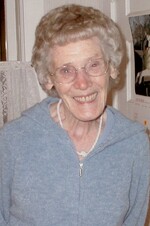 On Sunday evening, December 6, 2020, Anna passed from this earth to join her beloved husband Jim and son Jim (Hutch).

Anna Katherine Hutchinson, daughter of Dennis S Healey and Elsie Oberlander Healey was born in Holyoke Massachusetts on May 3, 1920. Mom grew up during the Depression and graduated from Holyoke High School in 1937. She worked for the Pal Blade Company during WWII. She married James Robert Hutchinson in September 1943 just before he was sent overseas. When Jim returned after WWII they worked at General Electric Company in Holyoke. When the plant closed they transferred to Pittsfield and spent the rest of their lives there.

Ann and Jim celebrated their 50th Wedding Anniversary in 1993 just before he died.

Ann and Jim both retired from General Electric Ordnance (Mom with 29-1/2 year’s service) and enjoyed traveling and being with their grandchildren before Jim’s passing.

Ann was a communicant of St. Joseph’s Church since 1959, a member of G.E. Pensioners Quarter Century Club and the Greylock Federal Credit Union Quality Time Club and the Senior Center. Most of all she loved and enjoyed her family children, grandchildren and great-grandchildren. The children were such a joy to her.

Our family would like to thank the Mt. Greylock ECF staff for the excellent care they took of Mom for the 5 years she lived there. They were very dedicated to good care, and were kind, compassionate, and friendly. They became family to Mom and to us. We are eternally grateful to them for her care.

FUNERAL NOTICE: Due to COVID-19, burial was private at St. Joseph Cemetery. There will be a memorial service at a later date when we are safely able to do so. Those who wish may make memorial contributions to St. Joseph Church or to Mt. Greylock Extended Care Facility Activities Fund in care of DERY FUNERAL HOME, 54 Bradford St, Pittsfield, MA 01201.